How big are mitochondria? 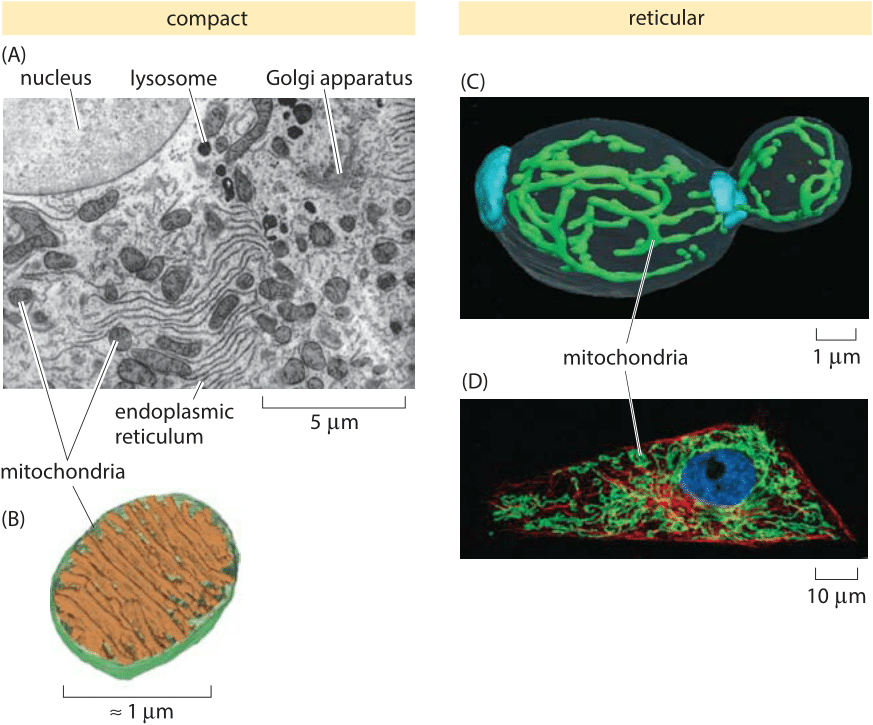 Figure 1: Shapes and sizes of mitochondria. (A) Electron microscopy image of a rat liver cell highlighting many of the important organelles and illustrating the size and shape of mitochondria. (B) Cryo electron microscopy reconstruction of the structure of a lamellar mitochondrion. (C) Reticular structure of mitochondria in a budding yeast cell. Bud scars are labeled separatedly in blue. (D) Reticular mitochondrial network in a PtK2 kangaroo rat cell. The mitochondria are visible in green and were labeled with an antibody against the proteins responsible for transport of proteins across the mitochondrial membranes. The tubulin of the microtubules are labeled in red and the nucleus is shown in blue. (A adapted from D. W. Fawcett, The Cell, Its Organelles and Inclusions: An Atlas of Fine Structure, W. B. Saunders, 1966, B courtesy of Terry Frey, C adapted from A. Egner et al., Proc. Nat. Acad. Sci., 99:3379 (2002); D adapted from R. Schmidt et al., NanoLetters, 9:2508, 2009.)

Mitochondria are famed as the energy factories of eukaryotic cells, the seat of an array of membrane-bound molecular machines synthesizing the ATP that powers many cellular processes. It is now thought that mitochondria in eukaryotic cells came from some ancestral cell taking up a prokaryote through a process such as endocytosis or phagocytosis and rather than destroying it, opting for peaceful coexistence in which these former bacteria eventually came to provide the energy currency of the cell.   One of the remnants of this former life is the presence of a small mitochondrial genome that bears more sequence resemblance to its prokaryotic precursors than to its eukaryotic host.

Figure 2: The structure of a mitochondrion. (A) Electron microscopy image of a mitochondrion from the pancreas of a bat. (B) Schematic illustrating the three membrane spaces relevant to mitochondria as well as the connectivity. (A adapted from D. W. Fawcett, The Cell, Its Organelles and Inclusions: An Atlas of Fine Structure, W. B. Saunders, 1966.)

Beyond their fascinating ancestry, mitochondria are also provocative as a result of their great diversity in terms of both size and shape. Though probably familiar to many for the morphology depicted in Figure 1 with its characteristic micron size bacterium-like shape and series of internal lamellae shown in magnified form in Figure 1, in fact, mitochondria have a host of different structural phenotypes.  These shapes range from onion-like morphologies to reticular structures such as those shown in Figures 1C and D in which the mitochondrion is one extended object, to a host of other bizarre shapes that arise when cells are exposed to an oxygen-rich environment or that emerge in certain disease states. These reticular mitochondria can spread over tens of microns.

As shown in Figure 2, electron microscopy images of mitochondria encourage their textbook depiction as approximately spherocylindrical in shape (i.e. cylinders with hemispherical caps) with a length of roughly two microns and a diameter of roughly one micron. These organelles are characterized by two membrane systems that separate the space into three distinct regions, namely, the space external to the mitochondrion, the intermembrane space between the mitochondrial inner and outer membranes and the matrix, which is the volume enclosed by the inner membrane. Different mitochondrial morphologies all respect this basic organizational connectivity.

How many mitochondria are in a cell? A characteristic order of magnitude for yeast would be 101 and for mammalian cells 103-104, but beware that the very idea of “counting” mitochondria can be tricky in many cases since the mitochondria are sometimes reticular and not distinct peanut shaped objects. For example, yeast grown on ethanol contain a larger number (20-30, BNID 103070) of small, discrete mitochondria while when these same cells are grown on glucose they contain a smaller number (~3, BNID 103068) of large, branched mitochondria. These distinct morphologies do not significantly affect the fraction of the cellular volume occupied by the mitochondria and probably relates to the different demands in a respiratory, versus  respiro-fermentative lifestyle.

How big is the endoplasmic reticulum of cells?
How big are chloroplasts?