How big are viruses? 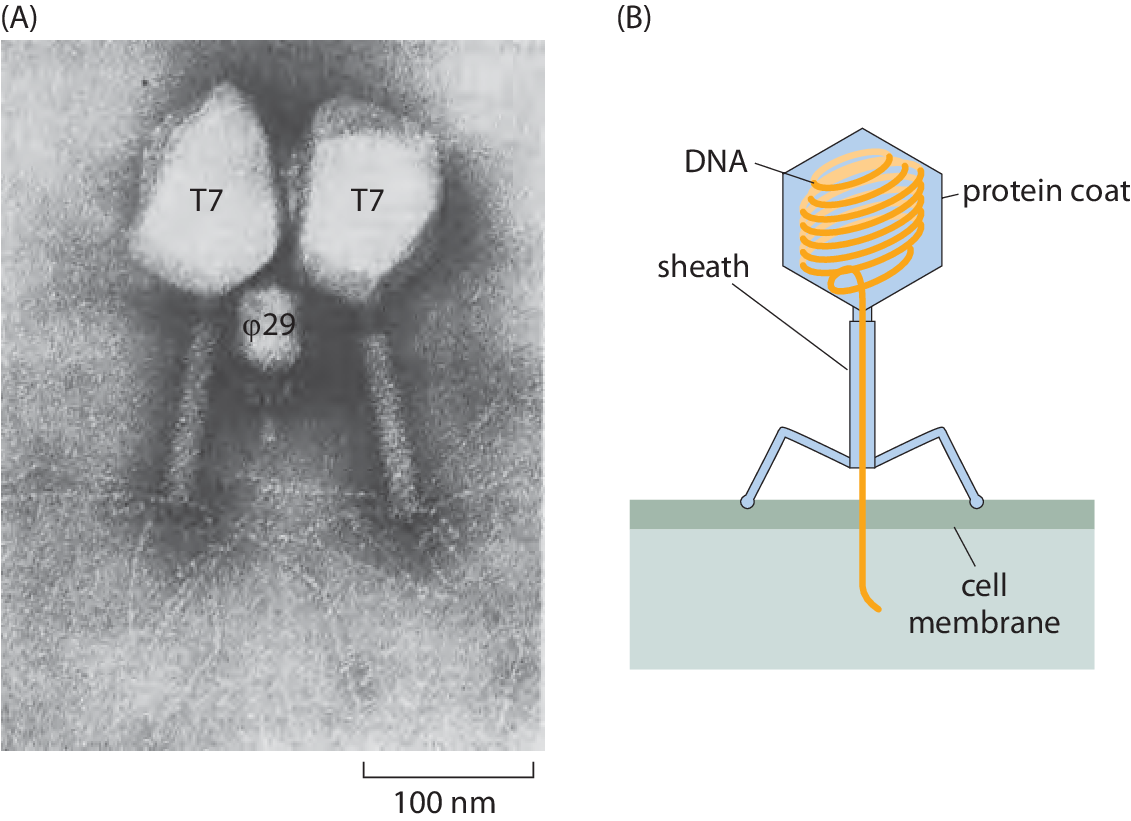 In terms of their absolute numbers, viruses appear to be the most abundant biological entities on planet Earth.  The best current estimate is that there are a whopping 1031 virus particles in the biosphere. We can begin to come to terms with these astronomical numbers by realizing that this implies that for every human on the planet there are nearly Avogadro’s number worth of viruses. This corresponds to roughly 108 viruses to match every cell in our bodies. The number of viruses can also be contrasted with an estimate of 4-6 x 1030 for the number of prokaryotes on Earth (BNID 104960). However, because of their extremely small size, the mass tied up in these viruses is only approximately 5% of the prokaryotic biomass. The assertion about the total number of viruses is supported by measurements using both electron and fluorescence microscopy.   For example, if a sample is taken from the soil or the ocean, electron microscopy observations reveal an order of magnitude more viruses than bacteria (≈10/1 ratio, BNID 104962). These electron microscopy measurements are independently confirmed by light microscopy measurements. By staining viruses with fluorescent molecules, they can be counted directly under a microscope and their corresponding concentrations determined (e.g. 107 viruses/ml). 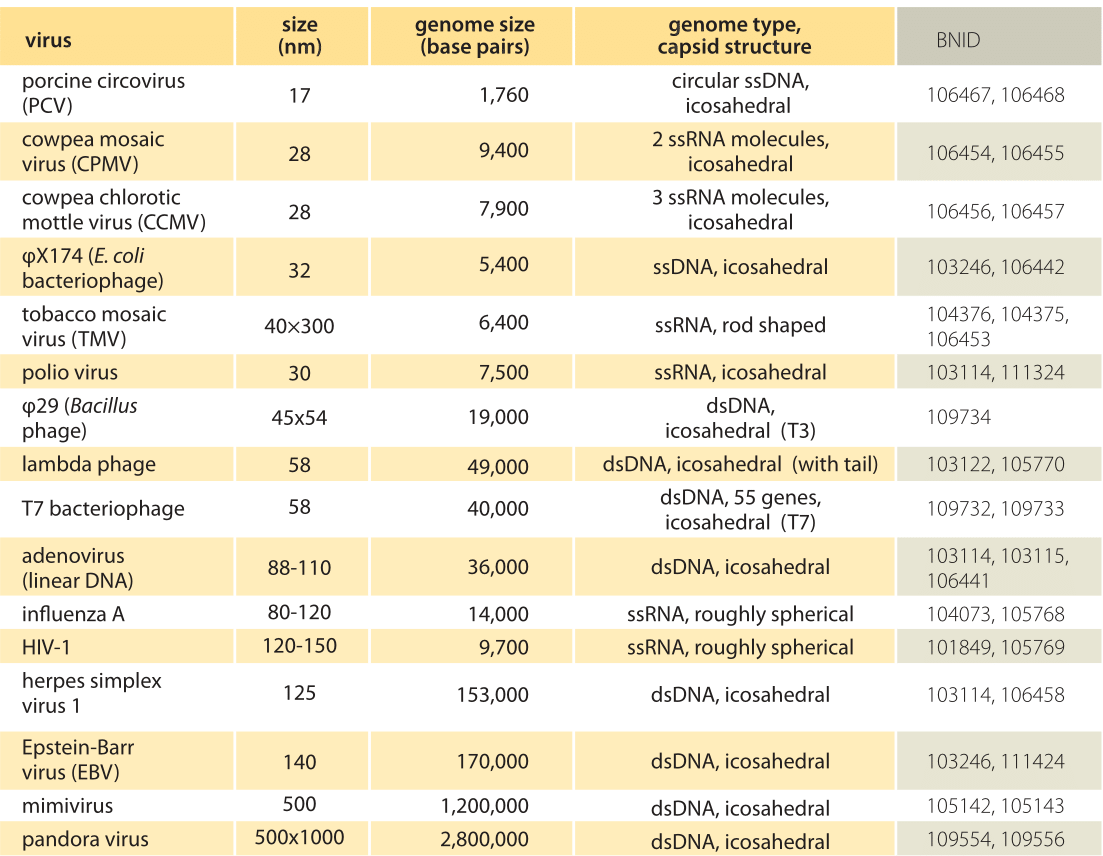 Table 1: Sizes of representative key viruses. The viruses in the table are organized according to their size with the smallest viruses shown first and the largest viruses shown last. The organization by size gives a different perspective than typical biological classifications which use features such as the nature of the genome (RNA or DNA, single stranded (ss) or double stranded (ds)) and the nature of the host. Values are rounded to one or two significant digit.

Organisms from all domains of life are subject to viral infection, whether tobacco plants, flying tropical insects or archaea in the hot springs of Yellowstone National Park.  However, it appears that it is those viruses that attack bacteria (i.e. so called bacteriophages – literally, bacteria eater – see Figure 1) that are the most abundant of all with these viruses present in huge numbers  (BNID 104839, 104962, 104960) in a host of different environments ranging from soils to the open ocean. 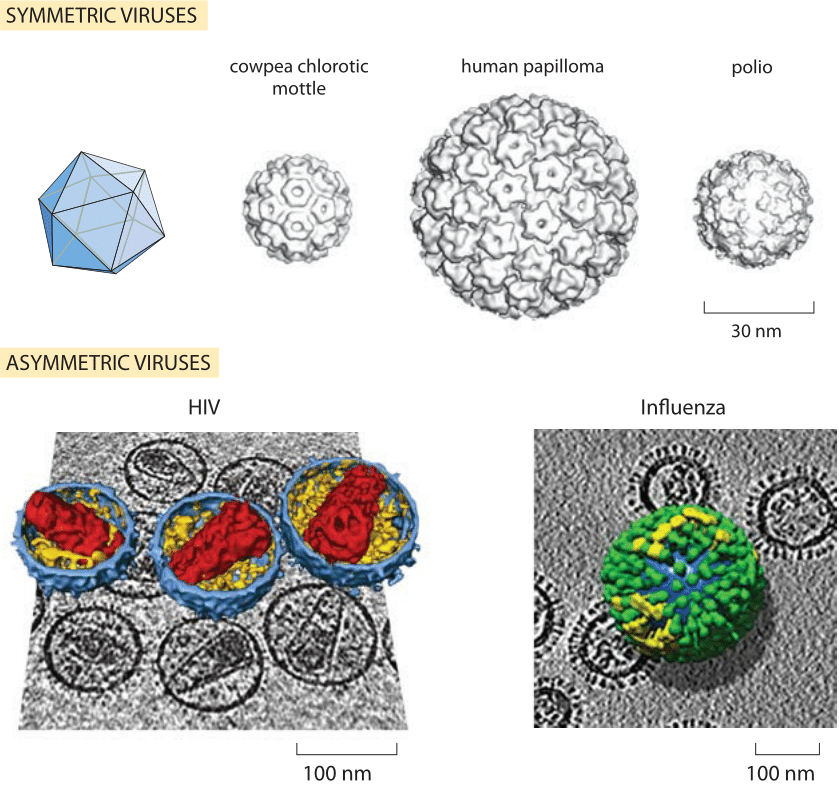 Figure 2: Structures of viral capsids. The regularity of the structure of viruses has enabled detailed, atomic-level analysis of their construction patterns. This gallery shows a variety of the different geometries explored by the class of nearly spherical viruses. HIV and influenza figures are 3D renderings of virions from the tomogram..(Symmetric virus structures adapted from T. S. Baker et al., Microbiol. Mol. Biol. Rev. 63:862, 1999. HIV structure adapted from J. A. G. Briggs et al., Structure 14:15, 2006 and influenza virus structure adapted from A. Harris, Proceedings of the National Academy of Sciences, 103:19123, 2006.)

As a result of their enormous presence on the biological scene, viruses play a role not only in the health of their hosts, but in global geochemical cycles affecting the availability of nutrients across the planet. For example, it has been estimated that as much as 20% of the bacterial mass in the ocean is subject to viral infection every day (BNID 106625). This can strongly decrease the flow of biomass to higher trophic levels that feed on prokaryotes (BNID 104965). 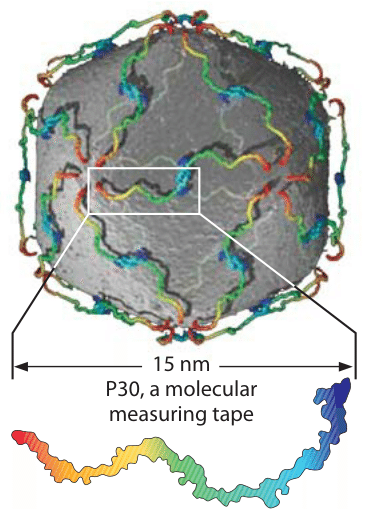 Viruses are much smaller than the cells they infect. Indeed, it was their remarkable smallness that led to their discovery in the first place. Researchers were puzzled by remnant infectious elements that could pass through filters small enough to remove pathogenic bacterial cells. This led to the hypothesis of a new form of biological entity. These entities were subsequently identified as viruses.

Viruses are among the most symmetric and beautiful of biological objects as shown in Figure 2.  The figure shows that many viruses are characterized by an icosahedral shape with all of its characteristic symmetries (i.e. 2-fold symmetries along the edges, 3-fold symmetries on the faces and 5-fold rotational symmetries on the vertices, figure 2). The outer protein shell, known as the capsid, is often relatively simple since it consists of many repeats of the same protein unit.  The genomic material is contained within the capsid.  These genomes can be DNA or RNA, single stranded or double stranded (ssDNA, dsDNA, ssRNA or dsRNA) with characteristic sizes ranging from 103-106 bases (BNID 103246, 104073. With some interesting exceptions, a useful rule of thumb is that the radii of viral capsids themselves are all within a factor of ten of each other, with the smaller viruses having a diameter of several tens of nanometers and the larger ones reaching diameters several hundreds of nanometers which is on par with the smallest bacteria (BNID 103114, 103115, 104073). Representative examples of the sizes of viruses are given in Table 1. The structures of many viruses such as HIV have an external envelope (resulting in the label “enveloped virus”) made up of a lipid bilayer. The interplay between the virus size and the genome length can be captured via the packing ratio which is the percent fraction of the capsid volume taken by viral DNA. For phage lambda it can be calculated to be about 40% whereas for HIV it is more than 10 times lower (BNID 111591).

Some of the most interesting viruses have structures with less symmetry than those described above. Indeed, two of the biggest viral newsmakers, HIV and influenza, sometimes have irregular shapes and even the structure from one influenza or HIV virus particle to the next can be different. Examples of these structures are shown in Figure 2. Why should so many viruses have a characteristic length scale of roughly 100 nanometers? If one considers the density of genetic material inside the capsid, a useful exercise for the motivated reader, it is found that the genomic material in bacterial viruses can take up nearly as much as 50% of the volume. Further, the viral DNA often adopts a structure which is close packed and nearly crystalline to enable such high densities. Thus, in these cases if one takes as a given the length of DNA which is tied in turn to the number of genes that viruses must harbor, the viruses show strong economy of size, minimizing the required volume to carry their genetic material.

To make a virus, the monomers making up the capsid can self assemble; one mechanism is to start from some vertex and extend in a symmetric manner. But what governs the length of a facet, i.e. the distance between two adjacent vertices that dictates the overall size of a viron? In one case, a nearly linear 83 residue protein serves as a molecular tape measure helping the virus to build itself to the right size. The molecular players making this mechanism possible are shown in Figure 3. A dimer of two 15 nm long proteins defines distances in a bacteriophage which has a diameter of about 70 nm.

The recently discovered gigantic mimivirus and pandoravirus are about an order of magnitude larger (BNID 109554, 111143). The mechanism that serves to set the size of remains an open question. These viruses are larger than some bacteria and even rival some eukaryotes. They also contain genomes larger than 2 Mbp long (BNID 109556) and challenge our understanding of both viral evolution and diversity.

Size and Geometry Introduction
How big is an E. coli cell and what is its mass?