How big is a budding yeast cell?

The budding yeast Saccharomyces cerevisiae has served as the model eukaryote in much the same way that E. coli has served as the representative prokaryote. Due to its importance in making beer and baking bread (thus also called Brewers’ or Bakers’ yeast), this easily accessible and simply cultured organism was also an early favorite of scientists, as interestingly recalled by James A. Barnett in a set of papers on the “beginnings of microbiology and biochemistry: the contribution of yeast research”. These cells are significantly larger than common bacteria and as such, are a convenient single-celled organism to study under the microscope. In large part due to the ease with which its genome can be manipulated, yeast has remained at the forefront of biological research and in 1996, was the first eukaryotic organism to have its genome completely sequenced. Another feature that makes yeast handy for geneticists is their dual life style as either haploids, having one copy of each gene, or diploids, which harbor two copies of each gene. Haploid cells have only one copy of each chromosome just like a human female egg cell. By way of contrast, diploid cells have two copies of each chromosome, just like somatic cells in our body. Haploids are analogous to our gametes, the egg cell and sperm cells. The haploid/diploid coexistence in budding yeast enables scientists to easily change genes, merge gene sets and study the effects of mutations.

We note that a simple rule of thumb for the dimensions of yeast cells is to think of them as spheres with a diameter of roughly 4 μm for haploids and roughly 6 μm for diploids as shown in Figure 1 (BNID 101796).   To put the relative sizes of yeast and bacteria in everyday terms, if we think of a world in which E. coli is the size of a human, then yeast is about the size of an elephant. Prominent components of the cell volume include the nucleus which takes up about 10% of the total cell volume (BNID 100491, 103952), the cell wall, often ignored but making up 10-25% (BNID 104593, 104592) of the total dry mass and the endoplasmic reticulum and vacuole, which are usually the largest organelles.

One of the ideas that we repeatedly emphasize in a quantitative way is the idea of cell-to-cell variability and its role in establishing the different behaviors of cells in response to different environmental cues. As yeast replicate by budding off small daughter cells from a larger mother, any population has a large range of cell sizes spread around the median as shown in Figure 2. The haploid strain shown has a median cell volume of 42±2 µm3 (BNID 100427). Another common metric is the 25th-75th percentile range which here is ≈30-60 fL. The median cell size itself is highly dependent on genetic and environmental factors. A diploid cell is almost twice as big as its haploid progenitors at ≈82 µm3 (BNID 100490). This reflects the more general observation from cell biology that median cell size tends to grow proportionally to ploidy (DNA content). Yeasts where ploidy can be manipulated to higher than two serve as useful test cases for illuminating this phenomenon. 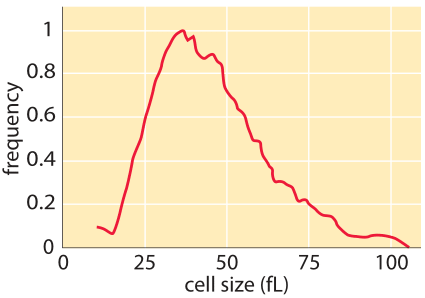 Beyond the bulk DNA content, the median cell volume can differ by more than 2-fold in different strains of S. cerevisiae, that evolved in different parts of the world, or more recently in different industries utilizing them. Finally, like E. coli, median cell size in yeast is correlated with growth rate – the better the environmental conditions and growth rate, the larger the cells (BNID 101747). An intriguing open question is – is there an evolutionary advantage of shifting cell size in response to environmental conditions? Recent measurements have probed how sensitive yeast cell size is to single gene deletions. In some of these deletion mutants, the median volume was only 40% of the wild type size whereas in others it was larger than wild type by >70% (BNID 100490). These observations reveal strong coupling between size regulation and the expression of critical genes. It still remains largely unknown how genetic and environmental changes shift the median cell size in yeast.

How big is an E. coli cell and what is its mass?
How big is a human cell?