How big is a photoreceptor?

One of the greatest charms of biology is the overwhelming diversity of living organisms. This diversity is reflected in turn by the staggering array of different types of cells found in both single-celled and multicellular organisms.  Earlier, we celebrated some of the most important “model” cells such as our standard bacterium E. coli and single-celled eukaryote, the yeast S. cerevisiae. Studies of these model systems have to be tempered by a realization of both the great diversity of single-celled organisms themselves, as shown in the vignette on cell size diversity, as well as of the stunning specializations in different cell types that have arisen in multicellular organisms.  The cells that make possible the sense of vision discussed in this vignette are a beautiful and deeply-studied example of such specializations.

There is perhaps no sense that we each take more personally than our vision. Sight is our predominant means of taking in information about the world around us, a capacity made possible as a result of one of evolution’s greatest inventions, namely, the eye, as shown in Figure 1. Eyes and the cells that make them up have been a central preoccupation of scientists of all kinds for centuries, whether in the hands of those like Helmholtz, who designed instruments such as the opthalmoscope to study eyes of living humans, or those like Darwin and his successors who have mused on how evolution could have given rise to such specialized organs. Chapter VI of “The Origin of Species” is entitled “Difficulties on Theory” and is used by Darwin as a forum to explain what he referred to as a “crowd of difficulties” that “will have occurred to the reader”.  He notes that some of these difficulties are “so grave that to this day I can never reflect on them without being staggered; but, to the best of my judgment, the greater number are only apparent, and those that are real are not, I think, fatal to my theory.” One of the most significant of those difficulties was what Darwin thought of as “organs of extreme perfection” such as our eye. He goes on to say that “To suppose that the eye, with all its inimitable contrivances for adjusting the focus to different distances, for admitting different amounts of light, and for the correction of spherical and chromatic aberration, could have been formed by natural selection, seems, I freely confess, absurd in the highest possible degree. Yet reason tells me, that if numerous gradations from a perfect and complex eye to one very imperfect and simple, each grade being useful to its possessor, can be shown to exist; if further, the eye does vary ever so slightly, and the variations be inherited, which is certainly the case; and if any variation or modification in the organ be ever useful to an animal under changing conditions of life, then the difficulty of believing that a perfect and complex eye could be formed by natural selection, though insuperable by our imagination, can hardly be considered real.” Our understanding of the long evolutionary history of eyes continues to evolve itself and a current snapshot can be attained by reading a recent review (such as Lamb et al, Nat. Rev. Neuro. 8:960, 2007). 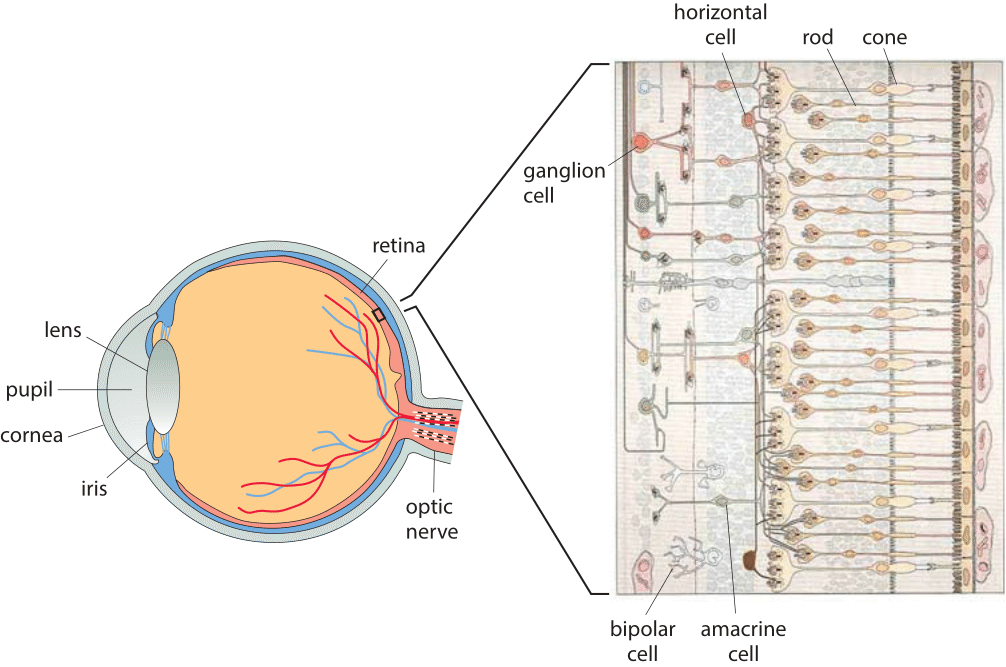 Figure 1: A multiscale view of the retina. The schematic on the left shows the entire eye. The magnified view on the right illustrates the organization of the different cell types in the retina ranging from the photoreceptors that receive light to the ganglion cells that communicate electrical impulses as a result of stimulation by light.(Adapted from R. W. Rodieck, The First Steps of Seeing, Sinauer Associates, 1998.)

What are these organs of extreme perfection like at the cellular level?  Figure 1 provides a multiscale view of the human eye and the cells that make it work, giving a sense of the complexity and specialization that so staggered Darwin. Our focus here is on the retina, the 100-300 µm thick (BNID 109683) structure at the back of the eye. The mammalian retina harbors two types of photoreceptor cells, rods that are mostly used for night vision and cones that enable color vision using three types of pigments.  As seen in Figure 1, in addition to the rods and cones, the retina is also populated by layers of cells such as horizontal cells, bipolar cells, amacrine cells and the ganglion cells that convey the information derived from the visual field to the brain itself. One of the surprising features of the human eye is that the photoreceptors are actually located at the back of the retina whereas the other cells responsible for processing the data and the optic nerve that conveys that information to the brain are at the front of the retina, thus blocking some of the photons in our visual field. This seems a strange feature for an organ considered a glaring example of optimality in Nature. Indeed in cephalopods, like the squid and octopus, the situation is reversed with the nerve fibers routing behind rather than in front of the retina. Further, it is worth noting that the human eye structure is not optimal not only in this respect but also in the aberrations it features, many of which are corrected by the cells downstream of the photoreceptors (Liang & Williams, J. Opt. Soc. Am. A, 1873:14, 1997).

Figure 2: Distribution of rods and cones in the vertebrate retina. Note that if we consider 100,000 rods/mm2 as the typical areal density, this corresponds to 10 µm2 per rod cell which jibes nicely with our simple estimate made above. (Adapted from R. W. Rodieck, The First Steps of Seeing, Sinauer Associates, 1998.) 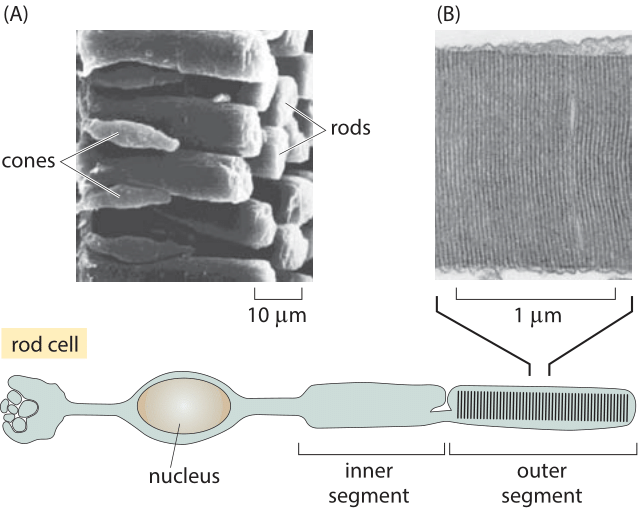 Figure 3: Anatomy of rods and cones. The schematic shows some of the key anatomical features of a photoreceptor cell. (A) A scanning electron micrograph illustrating the organization of rods and cones in the retina of a salamander. (B) Electron micrograph of the membrane discs of the outer segment of the photoreceptor. In both rods and cones the proteins holding the light absorbing retinal are homologous opsins: rhodopsins in rods and three types of spectrally distinct photopsins in cones. (A courtesy of Scott Mittman and David R. Copenhagen, B adapted from The Retina by J. Dowling).

The distribution of rods and cones throughout the retina is not uniform.  As shown in Figure 2, cones have the highest density at a central part of the retina called the fovea and thus enable extremely high resolution. To get a feeling for the optical properties of this collection of photoreceptors, it is perhaps useful to consider a comparison with digital cameras. We are used to cameras with 10 million pixels per image. Though a photoreceptor is much more functionally potent than a pixel, it is still interesting to contemplate how many photoreceptor cells we have and how this value compares to what we find in our cameras. To produce a naïve estimate of the number of photoreceptors in the human retina we need a rough sense of how much area is taken up by each such cell. A human rod cell is ≈2 microns in diameter (BNID 107894, which we note is a few times the wavelength of light). If we maximally stacked them we could get 500 by 500 such cells in a square millimeter, i.e. ≈250,000 rods/mm2.  Figure 2 reports experimental values that confirm this is close to reality. To finish the estimate of the total number of receptors decorating the back surface of the eye we consider the eyeball to be a hemisphere of 2-3 cm diameter as shown in Figure 3 (BNID 109680), implying an area of roughly 109 µm2. The number of photoreceptors can be estimated as (109 µm2/retina)/(4 µm2/photoreceptor) which yields ≈200 million photoreceptors in each of our eyes which is of the same order of magnitude as estimates based on current knowledge and visualization techniques (BNID 105347, 108321). Digital cameras still have a long way to go until they reach this number, not to speak of the special adaptation and processing that each cell in our eye can perform and a digital pixel cannot.

The anatomy of these individual photoreceptors is remarkable. As seen in Figure 3, a typical photoreceptor cell such as a rod is roughly 100 µm long (BNID 108246, 109684) and is characterized by a number of specialized features such as the roughly 25 micron long “outer segment” (BNID 107894, 107895) shown in Figure 3B that is filled with the rhodopsin molecules that absorb light. At the opposite extremity of these cells are the synapses – the structures used to communicate with adjacent cells. Synapses are crucial to the signal cascade that takes place following the detection of a photon by a photoreceptor cell. As seen in Figure 3, the outer segments of a photoreceptor rod cell are roughly 25 microns in length and are characterized by stacks of membrane discs. These discs are roughly 10 nm thick and are stacked in a periodic fashion with a spacing of roughly 25 nm. Given the outer segment ≈25,000 nm length, this means that there are roughly 1000 such discs in each of the ≈108 rod cells in the vertebrate retina (with about 108 rhodopsin molecules per rod cell as discussed in the vignette on “How many rhodopsin molecules are in a rod cell?”). These 1000 effective layers increase the cross section available for intercepting photons making our eyes such “organs of extreme perfection”.

How big is a human cell?
What is the range of cell sizes and shapes?