How big are chloroplasts?

Chloroplasts play a key role in the energy economy of the cells that harbor them.  Chloroplasts are less well known than their mitochondrial counterparts, though they are usually much larger and have a key role in producing the reduced compounds that store energy which is then broken down in mitochondria. Chloroplasts have the pivotal role in the biosphere of carrying out the chemical transformations linking the inorganic world (CO2) to the organic world (carbohydrates). This feat of chemical transformation enables the long-term storage of the fleeting sun’s energy in carbohydrates and its controlled release in energy currencies such as ATP and NADPH. Those same carbon compounds also serve to build all the biomass of cells as a result of downstream metabolic transformations.

Figure 1: Electron micrograph of a chloroplast. The light reactions occur in the membrane bound compartment called the thylakoid. There are usually about 40-60 stacks of disks termed grana per chloroplast (BNID 107013), covering 50-70% of the thylakoid membrane surface (BNID 107016). Each single stack has a diameter of 0.3-0.6 μm (BNID 107014). Sugar produced is stored in starch granules. (Adapted from B. Alberts et al, Mol. Biol. of the Cell, 4th ed., Figure 14-34, Garland science).

Chloroplasts in vascular plants range from being football to lens shaped and as shown in Figure 1, have a characteristic diameter of ≈4-6 microns (BNID 104982, 107012), with a mean volume of ≈20 μm3 (for corn seedling, BNID 106536). In algae they can also be cup-shaped, tubular or even form elaborate networks, paralleling the morphological diversity found in mitochondria. Though chloroplasts are many times larger than most bacteria, in their composition they can be much more homogenous, as required by their functional role which centers on carbon fixation. The interior of a chloroplast is made up of stacks of membranes, in some ways analogous to the membranes seen in the rod cells found in the visual systems of mammals. The many membranes that make up a chloroplast are fully packed with the apparatus of light capture, photosystems and related complexes.  The rest of the organelle is packed almost fully with one dominant protein species, namely, Rubisco, the protein serving to fix CO2 in the carbon fixation cycle. The catalysis of this carbon-fixation reaction is relatively slow thus necessitating such high protein abundances. 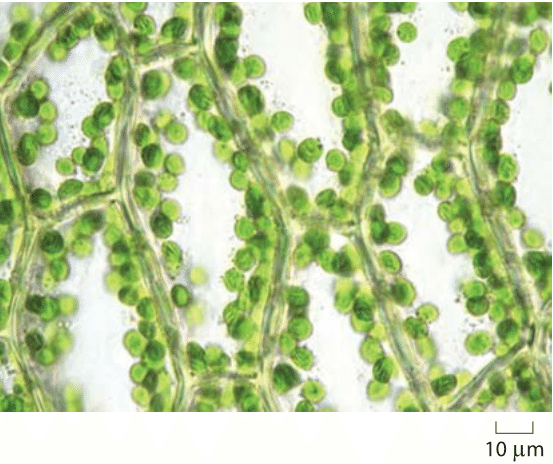 Figure 2: Chloroplasts in the moss Plagiomnium affine, found in old-growth boreal forests in North America, Europe and Asia, growing in moist woodland and turf. The shown lamina cells are elongated, with length of about 80 microns and width of 40 microns. These cells, as most plant cells, have their volume mostly occupied by large vacuoles so the cytoplasm and chloroplasts are at the periphery. Chloroplast also show avoidance movement, in which chloroplasts move from the cell surface to the side walls of cells under high light conditions to avoid photodamage. Used with permission from Ralf Wagner.
From: http://www.dr-ralf-wagner.de/Moose/Plagiomnium_affine.html

The number of chloroplasts per cell varies significantly between organisms and even within a given species can change significantly depending upon growth conditions. In the model algae Chlamydomonas reinhardtii there is only one prominent cup-shaped chloroplast per cell whereas in a typical photosynthetic leaf cell (mesophyll) from plants such as Arabidopsis and wheat there are about 100 chloroplasts per cell (BNID 107030, 107027, 107029). A vivid example from a moss is shown in Figure 2. Each chloroplast has tens to hundreds of copies (BNID 107105, 107107, 107108) of the chloroplast genome which is ≈100 kbp in length (BNID 105918). This creates a fascinating challenge of how to balance expression of genes that are coded in the chloroplast genome at thousands of gene copies per cell with the expression of genes that have a single copy in the main nuclear genome. In some cases such as the protein Rubisco they form a complex at one-to-one stoichiometric ratios!

Much evidence points to the idea that chloroplasts originated in a process of  endosymbiosis, i.e. they were originally free living cells – probably photosynthetic cyanobacteria –  that were engulfed (or enslaved) a billion years ago (BNID 107041) by cells that have become their new hosts. With time these originally distinct cells forged a tight collaboration in which most genes transferred from the engulfed cell to the host nucleus, in much the same way that the mitochondrial genome obtained its tiny size. From genomes that probably originally contained over 3000 genes only about 130 genes remain in the chloroplasts of contemporary plants (BNID 106553, 106554).

These processes of engulfment followed by adaptation can still be observed today. Through a process known as kleptoplasty, different organisms ranging from dinoflagellates to sea slugs are able to digest algae while keeping the chloroplasts of these algae intact. These captured plastids are kept functional for months and are used to “solar power” these organisms. Not only the act of engulfing but also the slower process of adaptation between the host and the organelle can be observed. In one study it was determined that in one out of ~10,000 pollen grains a reporter gene is transferred from the chloroplast to the nuclear genome (BNID 103096). How can such a low value be assessed reliably? A drug resistance gene that can only function in the nucleus was incorporated into the chloroplasts of tobacco plants. Pollen from these plants was used to pollinate normal plants. 250,000 seeds were screened and 16 showed resistance to the drug. Now here is the catch – chloroplast genomes are transferred only through the mother. The pollen has only nuclear genes. The only way for the resistance gene to arrive through the pollen was shown to be through infiltration from the chloroplast genome into the nuclear genome. Measuring the rate of this process gives some insight into how genomes of organelles can be so small. It leaves open the question of what is the selective advantage of transferring the genomic information from the organelle’s DNA to the central cell repository in the nucleus.

All told, chloroplasts are organelles of great beauty and sophistication.  Their intriguing evolutionary history is revealed in their compact genomes.  Structurally, their stacked membrane systems provide a critical system for capturing light and using its energy for the synthesis of the carbohydrates that are at the center of food chains across the earth.

How big are mitochondria?
How big is a synapse?