How many cells are there in an organism?

Table 1: Number of cells in selected organisms based on counting using light or electron microscopy for values smaller than 10,000, or for larger values, estimated based on average cell size and total organism size.

The fact that all organisms are built of basic units, namely cells, is one of the great revelations of biology. Even though often now taken as a triviality, it is one of the deepest insights in the history of biology and serves as a unifying principle in a field where diversity is the rule rather than the exception. But how many cells are there in a given organism and what controls this number and their size? The answer to these questions can vary for different individuals within a species and depends critically on the stage in life. Table 1 attempts to provide a feel for the range of different cell counts based upon both measurements and simple estimates. This will lead us to approach the classic conundrum: does a whale vary from a mouse mostly in the number of cells or is it the sizes of the cells themselves that confer these differences in overall body size?

Figure 1: Estimate of the number of cells in a human body based on characteristic volumes. 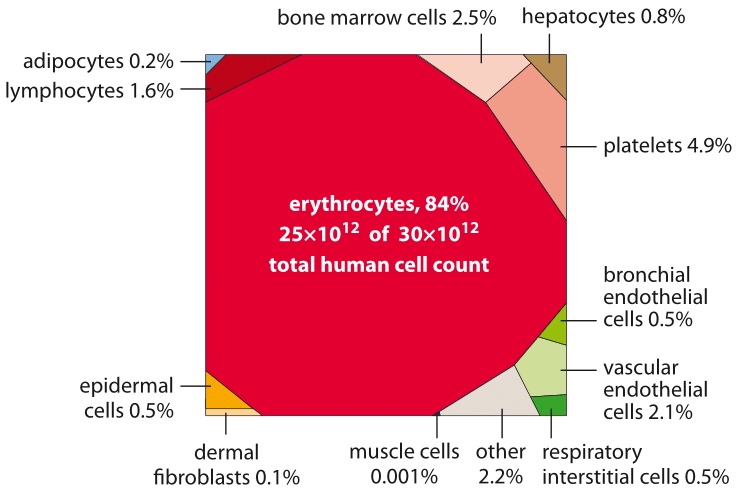 Figure 2: Estimate of the number of cells in an adult human divided by cell type. Each cell type in the human body is represented as a polygon with an area proportional to the number of cells. The dominant component is red blood cells. Based on data from R. Sender et al., in preparation, 2015.

Perhaps the most intriguing answer to the question of cell counts is given by the case of C. elegans, remarkable for the fact that every individual has the same cell lineage resulting in precisely 1031 cells (BNID 100582) from one individual to the next for males and 959 cells (BNID 100581) for hermaphrodites (females also capable of self fertilization). Specific knowledge of the cell inventory in C. elegans makes it possible to count the number of cellular participants in every tissue type and reaches its pinnacle in the mapping of most synaptic connections among cells of the nervous system (including the worm “brain”) where every worm contains exactly 302 neurons. These surprising regularities have made the worm an unexpected leading figure in developmental biology and neuroscience. It is also possible to track down the 131 cells (BNID 101367) that are subject to programmed cell death (apoptosis) during embryonic development. Though not examined to the same level of detail, there are other organisms besides C. elegans that have a constant number of cells and some reveal the same sort of stereotyped development with specific, deterministic lineages of all cells in the organism. Organisms that contain a fixed cell number are called eutelic. Examples include many but not all nematodes, as well as tardigrades (aka, water bears) and rotifers. Some of our closest invertebrate relatives, ascidians such as Ciona, have an apparently fixed lineage as embryos, but they do not have a fixed number of cells as adults, which arise from metamorphosis of their nearly eutelic larvae. Having a constant number of cells therefore does not seem to have any particular evolutionary origin but rather seems to be a common characteristic of rapidly developing animals with relatively small cell numbers (on the order of 1000 somatic cells). 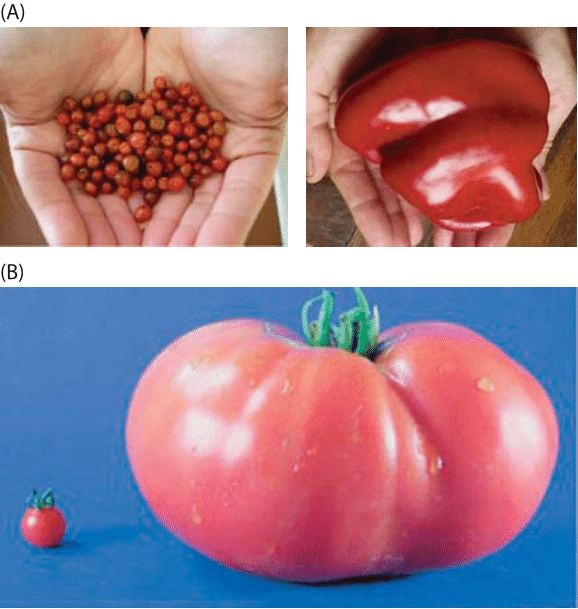 In larger organisms, the cellular census is considerably more challenging. One route for making an estimate of the cellular census is to resort to estimates based upon volume as shown in Figure 1. For example, a human with a mass of ≈100 kg will have a volume of ≈10-1 m3. Mammalian cells are usually in the volume range 103-104 μm3=1015-10-14 m3, implying that the number of cells is between ≈1013-1014 which is the range quoted in the literature (BNID 102390). Though the sizes (linear dimension) of eukaryotic organisms can vary by more than 10 orders of magnitude, the size of their cells measured by the “radius”, for example, usually varies by only a factor of ten at most except for intriguing exceptions such as the cells of the nervous system and oocytes. However, the level of accuracy of estimates like those given above on the basis of volume should be viewed with a measure of skepticism as can be easily seen by considering your recent blood test results. The normal red blood cell count is 4-6 million such cells per microliter. With about 5 liters of blood in an adult this results in an estimate of 3×1013 such cells rushing about in your blood stream, already for this cell type alone as many as the total number of cells in a human body we estimated using volume arguments. The disagreement with the estimate above results from the fact that red blood cells are much smaller than the characteristic mammalian cell at about 102 μm3 in volume. This shows how the above estimate should in fact be increased (and several textbooks revised). A census of the cells in the body was achieved by methodically analyzing different cell types and tissues arriving at a value of 3.7±0.8×1013 cells in a human adult (BNID 109716). The breakdown by cell type for the major contributors is shown in Figure 2. The numerical dominance of red blood cells is visually clear. Of course we do not account for bacterial cells or other residents in our body, the number of cells composing this so called microbiota outnumber our human cells by a factor still unknown but probably closer to a hundred than to the often quoted value of ten. 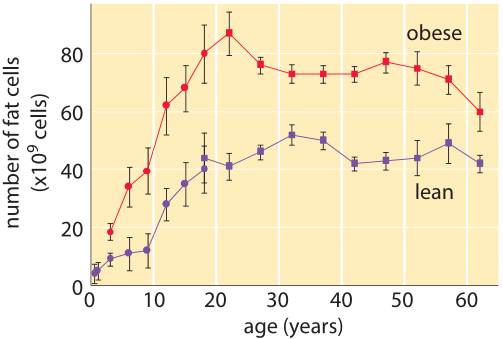 What is the connection between organism size, cell size and cell number? Or to add some melodrama, does a whale mostly have larger cells or more cells than a mouse? In studying the large variation in fruit organ size as shown in Figure 3 it was found that the change in the number of cells is the predominant factor driving size variability. In the model plant Arabidopsis thaliana, early versus later leaves vary in total leaf area from 30 to 200 mm2 (BNID 107043). This variation comes about as a result of a concomitant change in cell number from 20,000 to 130,000 with cell area remaining almost constant at 1600 μm2 (BNID 107044). In contrast, in the green revolution that tripled yields of rice and wheat in the 1970’s, a major factor was the introduction of miniature strains where the smaller size makes it possible for the plant to support bigger grains without falling over. The smaller cultivars were achieved through breeding for less response to the plant hormones gibberellins that affects stem cell elongation. In this case, a decrease in cell size, not cell number, is the dominant factor, a change in the underlying biology of these plants that helps feed over a billion people.

When the ploidy of the genome is changed the cells tend to change size accordingly. For example, cells in a tetraploid salamander are twice the size of those in a diploid salamander, although the corresponding organs in the two animals have the same size. Everything fits well because the tetraploid salamander contains half as many cells as the diploid (BNID 111481). 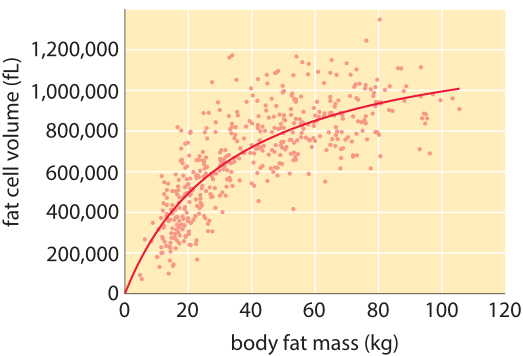 Figure 5: Average fat cell size as a function of body fat mass. As the fat content of a person increases the average adipocyte volume initially increases almost linearly and then saturates. Thus the change in total fat among humans can be attributed mostly to larger cells of a similar number and at more extreme disparities also to change in the number of fat cells. (Adapted from K. L. Spalding, Nature 453:783, 2008.)

When two people differ in size, is it due to a difference in the number of cells or in the average size of cells? We can begin to answer such questions by appealing to data for lean versus obese humans. Obese adults have on the average almost twice as many fat cells. This difference between lean and obese human adults is usually established at an early age as shown in Figure 4. What about the average cell size? Figure 5 shows the variation in the average volume of a fat cell as a function of the body fat mass. At low body fat masses the close to linear increase, passing through the origin, indicates that in this regime, differences are mostly driven by a change in the volume of the cells, i.e. the total number of cells remains relatively constant. At the high body fat range the cell volume increase is sub linear, indicating that an increase in the number of cells is becoming important. The extra fat weight, that in obese individuals can reach 100 kg, is accompanied by a change in the number of fat cells as shown in Figure 4 of less than 1011 which is much less than 1% of the total number of cells in the body estimated above. Thus we conclude that between lean and obese people the main change is a change in fat cell volume rather than total number of cells in the body. This is contrasted by what happens when comparing across organisms of very different sizes, say between a human and a mouse. Both organisms have cells that are usually of similar size though a person weighs more than a thousand times more. Thus in this case, and we claim this is often the case across multicellular organisms that are orders of magnitude apart, the number of cells is the main driver of size differences. With elephants having red blood cells (BNID 109091), as well as other cells, of sizes not unlike ours (BNID 109094) we hypothesize that this is also true for them.

A Quantitative Miscellany – Introduction
How many chromosome replications occur per generation?