How many photons does it take to make a cyanobacterium?

Autotrophs are those organisms that are able to make a living without resorting to preexisting organic compounds and as such, are the primary producers of organic matter on planet Earth. One of the most amazing autotrophic lifestyles involves the use of inorganic carbon in the form of CO2 and the synthesis of organic carbons using light as the energy input, the phenomenon known as photosynthesis. Chemoautotrophs carry out a similar performance, though in their case, the energy source is not light from the sun, but some other terrestrial energy source such as a thermal vent in the ocean or a reduced inorganic compound such as molecular hydrogen or ferrous iron.

Photoautotrophs refer to the sum total of those organisms that take energy from sunlight and convert it into organic compounds that can be oxidized. The most familiar examples are the plants that surround us in our forests and gardens. However, the overall synthetic budget goes well beyond that coming from plants and includes algae and a variety of microscopic organisms including single-celled eukaryotes (protists) and a whole range of prokaryotes such as cyanobacteria (formerly known as blue-green algae). 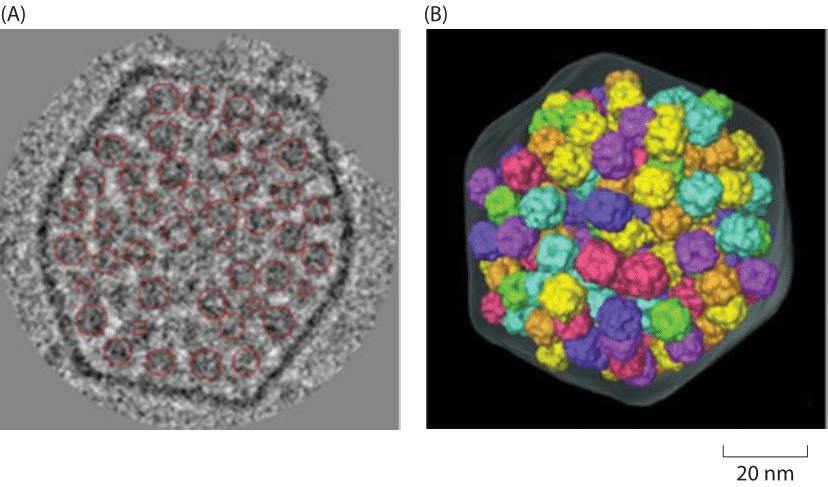 Figure 1: The structure of carboxysomes and the Rubisco octamers occupying them as determined using cryo electron microscopy. The sizes of individual carboxysomes in this organism (Synechococcus strain WH8102) varied from 114 nm to 137 nm, and were approximately icosahedral. There are on average ≈250 Rubisco octamers per carboxysome, organized into three to four concentric layers. Synechococcus cells usually contain about 5-10 carboxysomes. (Adapted from C. V. Iancu et al., Journal of Molecular Biology, 372:764, 2007.)

The majority of the Earth’s surface is covered by water and photosynthesis in these great aqueous reservoirs is a significant fraction of the total photosynthetic output across the planet as a whole. Aquatic photosynthesis is largely performed by organisms so small they are not visible to the naked eye. Despite their macroscopic invisibility, these organisms are responsible for fixing ≈50 gigatons (BNID 102936, 1039 CO2 molecules) of carbon every year. This accounts for about one half of the total primary productivity on earth (BNID 102937) but the vast majority of this fixed carbon is soon returned to the atmosphere following rapid viral attacks, planktonic grazing and respiration (BNID 102947). The process of transforming inorganic carbon into the building blocks of the organic world occurs through the process of carbon fixation, where the energy from about 10 photons is used in order to convert CO2 into a carbohydrate, (CH2O)n. The H is donated by water as an electron donor, which is thus transformed into oxygen. By comparing the combustion energy stored per carbon in carbohydrates versus the energy in solar flux leading to 10 photosynthetically active photons the overall theoretical conversion efficiency can be calculated to be about 10%. This is similar to current off the shelf photovoltaic cells that result in electricity rather than carbohydrates as output. The biological efficiency that is actually realized is usually lower by another 1-2 orders of magnitude due to respiration, light saturation and other processes but on the other hand these photosynthetic machines can reproduce and heal themselves which cannot be said of silicon cells.

Figure 2: Order of magnitude estimation of the number of photons required to build a cyanobacterium.

The process of oxygenic photosynthesis was invented about 3 billion years ago and transformed our atmosphere from one with practically no oxygen to one where abundant oxygen allows the existence of animals like us. Much of the carbon fixation happens in small organelles like those shown in Figure 1 and known as carboxysomes. Carboxysomes exist in some photosynthetic prokaryotes and are home to an army of molecules which perform the carbon fixation process through a key carboxylating enzyme, Rubisco, considered by many to be the most abundant protein in the biosphere. To make its ubiquity more tangible, if we were to distribute it from autotrophs to humans there would be about 5 kg of this protein per person on earth (BNID 103827).

From an order of magnitude perspective, it suffices to think of a cyanobacterium as similar in chemical composition to a conventional bacterium, which means that it takes roughly 1010 carbons (see vignette on “What is the elemental composition of a cell?”) to supply the building materials for a new cyanobacterium with a volume of 1 μm3 as depicted in figure 2. Given that it requires roughly ten photons to fix a carbon atom, this implies roughly 1011 photons are absorbed to fix those 1010 carbons. This carbon fixation is carried out by roughly 104 Rubisco monomers within a given cyanobacterium. What about the energy required for other cellular processes such as amino acid polymerization into proteins and keeping the membrane potential maintained to drive a multitude of coupled reactions? For bacteria these energetic requirements were estimated to be on the order of 1010 ATP as discussed in the vignette on “What is the power consumption of a cell?”. Given that a photon can be used to produce more than one ATP equivalent (through extruding protons or electron storage in NADPH) we find that the burden of carbon fixation is dominant over these other biosynthetic and maintenance tasks.

What is the permeability of the cell membrane?
How many virions result from a single viral infection?