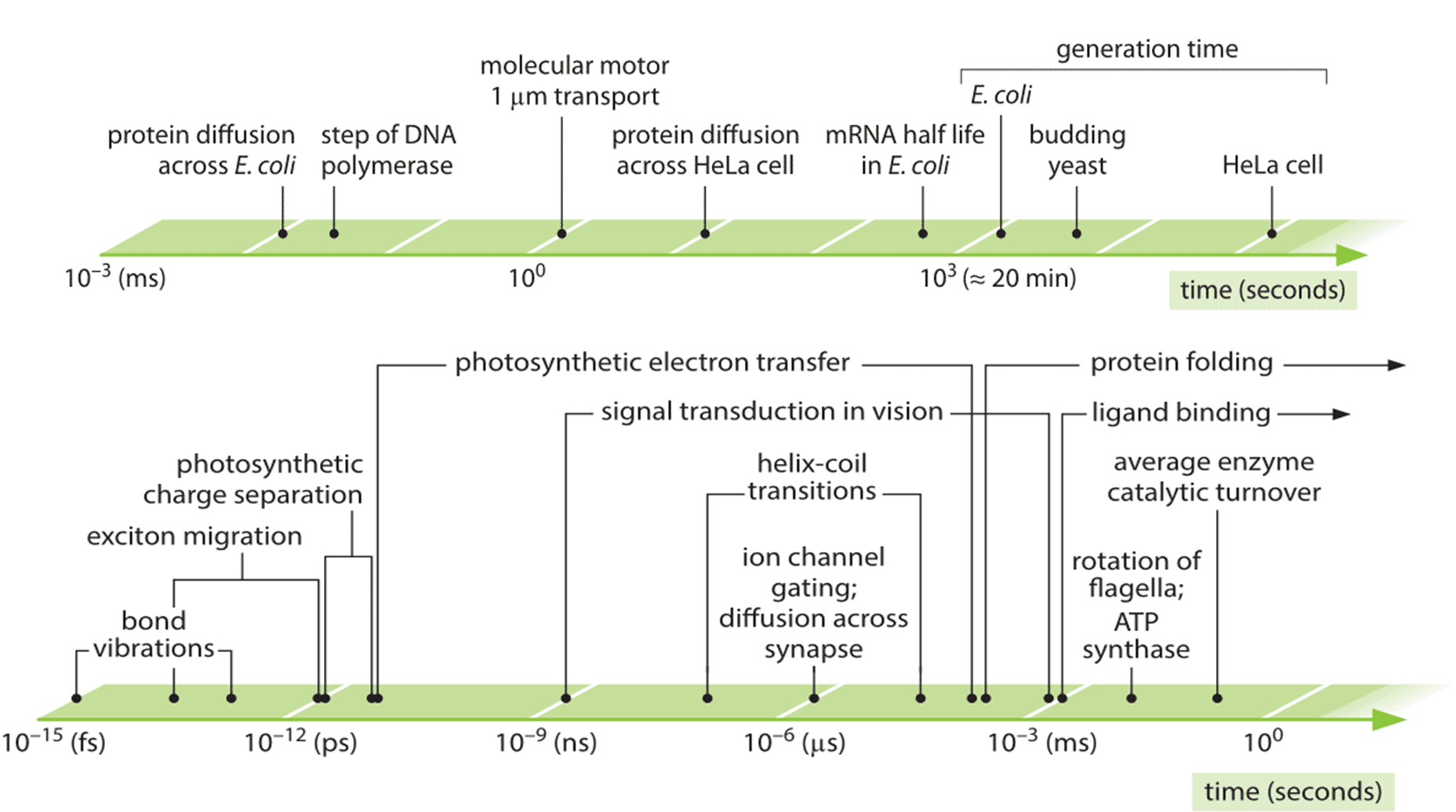 Figure 1: Range of characteristic time scales of central biological processes. Upper axis shows the longer timescales from protein diffusion across a bacterial cell to the generation time of a mammalian cell. The lower axis shows the fast timescales ranging from bond vibrations to protein folding and catalytic turnover durations.

This chapter explores another important quantitative theme in biology, namely, “how fast”.  A feeling for the numbers in biology is built around an acquaintance with how large the main players are (i.e. the sizes of macromolecules, organelles, cells and organisms), what concentrations they occur at and the time scales for the many processes that are carried out by living organisms.  Both the hard data and rules of thumb that run through the present chapter and depicted in Figure 1 can serve as the basis for developing intuition about the rates of a broad spectrum of biological processes.

One of the most obvious features of the living world is its dynamism.  If we look down a microscope at low magnification at a sample of pond water or the contents of a termite’s gut, we are greeted with a world teeming with activity, with cells of all shapes and sizes jostling about every which way.  If we increase the magnification, we can then resolve the cellular interior, itself the seat of a dazzling variety of processes playing out at all sorts of different time scales. This same dynamic progression continues unabated down to the scale of the ions and molecules that serve as the “ether” of the cellular interior. What sets the time scales for these different processes?

We begin the chapter by considering one of the most important facts of life, namely, that molecules (and even larger assemblies such as viruses or organelles) diffuse. Diffusion is the inevitable motion that results from collisions between the molecule (or particle) of interest and the molecules of the surrounding medium. These diffusive motions mean, for example, that if an ion channel opens and permits the entry of ions into the cellular interior, those ions will leave the vicinity of the channel and spread out into the cellular milieu. Stated simply, these diffusive motions give rise to a net flux from regions of high concentration to regions of low concentration resulting in an overall homogenization of concentration differences over long time scales.

We then explore the rates associated with the motions of other small molecules in the cell. In addition to the dynamics of the passive motions of molecules within cells, one of the most interesting things that happens to these molecules is that they change their chemical identity through a terrifyingly complex network of reactions.  Cells have many tricks for speeding up the rates of many (if not most) of these chemical transformations. The central way in which rates are sped up is through enzymes.  Several of our vignettes focus on the time scales associated with enzyme action and what sets these scales.

Once we have settled the diffusive and enzymatic preliminaries, the remainder of the chapter’s examples center on the temporal properties of specific processes that are especially important to cell biology.  We consider the processes of the central dogma –transcription, translation – and compare their rates. We then analyze other cell processes and tie them together to see the rate at which cells undergo cell division and the cell cycle as another one of the signature time scales in cell and molecular biology. A unifying theme in our depiction is trying to ask what governs the rates and why they are not any faster. All other things being equal, faster rates can enable a smaller investment of cell resources to achieve the same required flux. Freeing resources can increase growth rate or yield, common proxies, even if laden with subtleties, for fitness.

How does metabolic rate scale with size?
What are the time scales for diffusion in cells?