What are environmental O2 and CO2 concentrations?

We all know that the air we breathe is made up of 20% oxygen. The concentration of carbon dioxide has recently surpassed levels of 400 parts per million, the highest in millions of years, pumped up by human activities. These atmospheric gases are critical to the life styles of plants and animals alike.  However, biological reactions take place in liquid media and thus should depend upon the solubility of these key inorganic constituents. What concentrations of oxygen and carbon dioxide do cells see in their everyday lives in the watery media within which they live?

Living organisms are built out of four main types of atoms: carbon, oxygen, nitrogen and hydrogen. In the human body, together they amount to ≈96% of the wet weight and ≈87% of the dry weight as shown in the vignette “What is the elemental composition of a cell?”. However, the pool of these constituents in the cellular milieu is often in limited supply. For example, as we will discuss below oxygen is soluble in water to only about 10 parts per million. In the case of carbon and nitrogen, these atoms are tied up in a relatively inert inorganic form sequestered in CO2 and N2, respectively. As a result, cells must find ways to draw these molecules out of these otherwise inaccessible reservoirs and convert them into some usable form. Though “water” and “air” are known to all in the same way that anyone that lives in northern climes has a visceral response to the word “snow”, it is often forgotten that these words from the common vernacular mask a rich molecular reality. 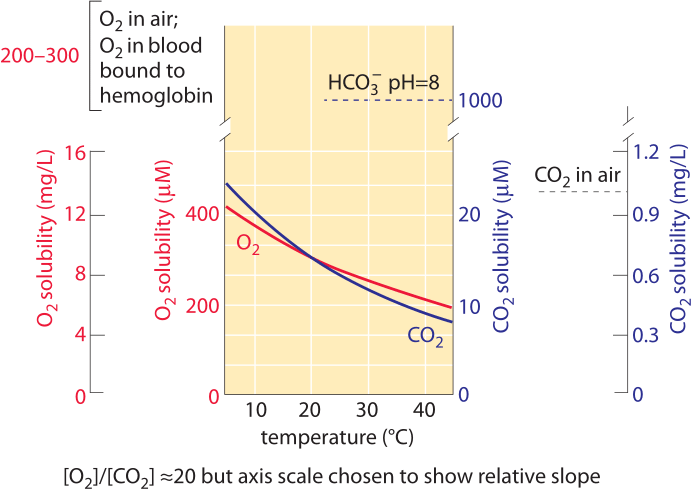 Figure 1: The oxygen and carbon dioxide solubility in water and their dependence on temperature under normal air composition. The Y-axis values for the two gases were chosen to enable comparison of the change with temperature but note that the oxygen concentration scale is 10 times larger. The concentration of oxygen in air is about 500 times higher than CO2, but oxygen is about 50 times less soluble. For both gases the concentration is lower at higher temperatures. As the temperature increase the availability of CO2 decreases faster than that of oxygen. Bicarbonate (HCO3-) is the most abundant inorganic form of carbon in the pH range 6-10. Oxygen in blood is carried mostly bound to hemoglobin at a concentration similar to that of oxygen in air. This concentration is about 50 times higher than would be carried by the blood liquid without hemoglobin. Plot refers to fresh water; solubility is about 20-30% lower in ocean salt water. Data in the curves calculated by the authors based on Henry law.

Carbon enters the biosphere when it is transformed from its oxidized form in CO2 to a reduced form mostly in the carbohydrate repeating motif (CHOH)n. This motif makes up sugars in general, and is the prime component of the cell walls present in both the microbes and plants that make up most of the organic matter in the biosphere. This transformation occurs in a process known as carbon fixation performed by plants, algae and a range of bacteria known as autotrophs. The concentration of dissolved CO2 in water at equilibrium with the atmosphere is ≈10 µM (BNID 108697) as shown in Figure 1. This means there are only about 104 CO2 molecules in a water volume the size of a bacterium.  This should be compared to the 1010 carbon atoms that are required to constitute a bacterium. The concentration of O2 is similarly quite low at ≈100-300 µM (BNID 109182 and see Figure 1 to appreciate how this solubility changes with temperature). The solubility of oxygen in water is about 50 times smaller than that of CO2. As a result, even though oxygen in air is about 500 times more abundant than CO2, the concentration ratio between O2 and CO2 in solution is about 10 rather than 500. By definition, each mg/L in Figure 1 is one part per million in terms of mass, so the rarity of oxygen and carbon dioxide can be directly appreciated by noting that the concentration of these gases are in the single digit domain in terms of mg/L and thus also only very few parts per million. CO2 has the added feature that it reacts with water to give, at physiologically relevant pH values, mostly bicarbonate (HCO3–). At pH 7 there is about 10-fold more inorganic carbon in the form of bicarbonate than dissolved CO2. At pH 8, characteristic of ocean water, there is 100-fold more bicarbonate than dissolved CO2. These pools are of importance to anyone who aims to gauge the pools of inorganic carbon available to cells. Specifically, the census of these molecular reservoirs is of importance to understanding the carbon sequestration in the oceans or the transport of inorganic carbon in our blood from tissues to the lungs. The transition from CO2 to bicarbonate and vice versa is enhanced by the action of carbonic anhydrase. This transition allows the cell to replenish the quickly depleted small pool of CO2 from the much bigger pool of inorganic carbon in the form of bicarbonate. 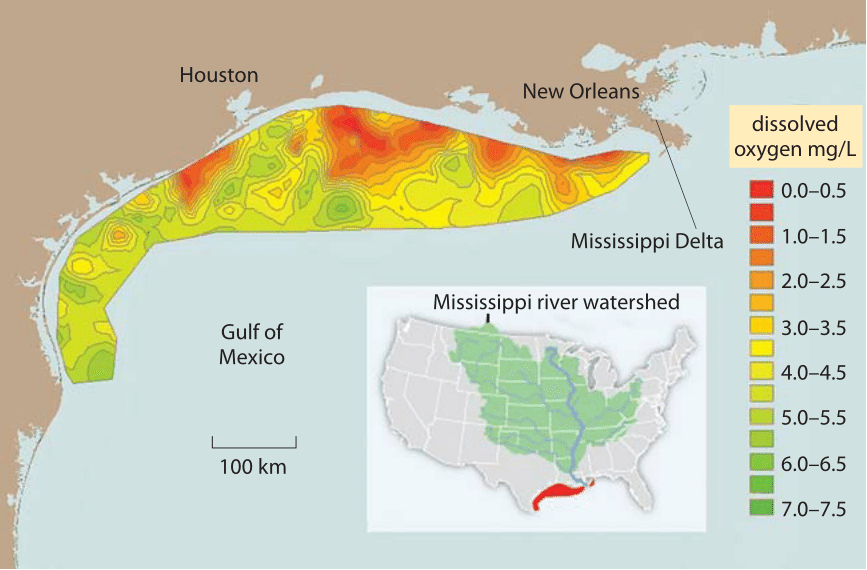 Figure 2: Dead zone in the Gulf of Mexico due to agricultural fertilizers borne by the Mississippi River. The long term average for the area of mid summer bottom water hypoxia (colored red), where dissolved oxygen levels <2 mg/L (aka dead zone, where oxygen depletion leads to fish suffocation) is 13,000 square km, about the area of Connecticut. Values report the oxygen as measured at sea bottom stations. Normal, close to complete saturation with (oxygen translates to concentrations of about 7-9 mg/L as shown in Figure 1. 1 mg/L is about 1 part per million. Values for other parts of the Gulf of Mexico are not shown because there are no measurement stations located there. (Figure adapted from NOAA. http://service.ncddc.noaa.gov/rdn/www/media/hypoxia/maps/2011-hypoxia-contours.jpg http://www.ncddc.noaa.gov/hypoxia/products/ http://si.wsj.net/public/resources/images/NA-AZ768A_DEADZ_NS_20090817185740.jpg http://toxics.usgs.gov/hypoxia/hypoxic_zone.html)

In many aqueous environments the low solubility and slow diffusion of O2 is a major limitation for the aerobic metabolism of organisms. For example, consider the acute environmental problem of eutrophication, the process whereby oxygen gets depleted when excessive amounts of fertilizers containing nitrogen and phosphorous are washed to a previously nutrient-limited water basin, leading to plankton blooms. When the plankton subsequently sinks, its biomass is respired by bacteria that consume oxygen in the process. Limited oxygen supply translates into enormous dead zones in the Gulf of Mexico, some as large as the area taken up by the state of Connecticut as shown in Figure 2. While the concentration of oxygen can be limiting for respiration in some organisms, for those that perform carbon fixation it can actually be too high. As noted in Figure 1, there is a dependence of solubility on temperature, such that there is relatively less CO2 with respect to O2 at higher temperatures. This is suggested to drive the selective pressure leading to C4 plants (e.g. maize and sugar cane), which employ metabolic pumps to locally increase CO2 concentrations for carbon fixation. 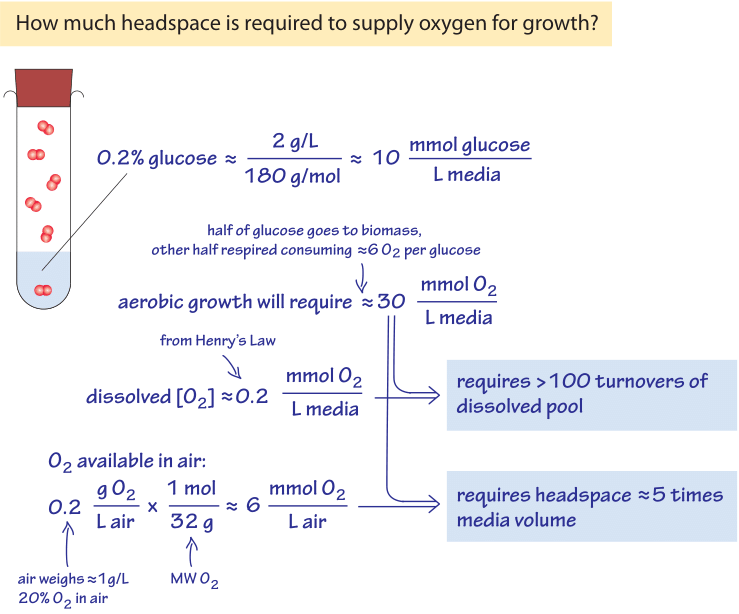 Figure 3: Back of the envelope calculation on the oxygen availability for growth in liquid media & the growth chamber headspace filled with air.

To illustrate the meaning of the low oxygen concentrations found in marine environments in a familiar lab context, think of an overnight culture of bacteria. The cells grow from a small number of cells to saturation at an OD600 of about 1 (corresponding to about 100-1000 million bacterial cells per mL as discussed in the vignette on “What is the concentration of bacterial cells in a saturated culture?”), under conditions that can largely be described as aerobic. The growth is facilitated by a sugar such as glucose in the media (say 0.2% by mass, equivalent to ≈10mM). A simple calculation regarding the oxygen requirements of such growth is schematically depicted in Figure 3. As a reasonable benchmark scenario, consider that about half of this sugar will be used for building biomass and the other half to make energy (as evidenced in the observation that the yield of carbon stored as biomass from the carbon taken from the growth media is usually ≈0.5, BNID 105318). The stoichiometry of the process of respiration is such that for each glucose molecule, 6 O2 molecules are used. Hence, in a closed system, 5 mM of glucose respired to make energy will require about 30 mM of oxygen. The oxygen concentration was noted above to be in the hundreds of µM, which is about 100 times lower. We can thus conclude as calculated in Figure 3 that there will need to be more than 100 replenishment cycles (turnovers) of the dissolved oxygen pool in the growth media to supply the needs of respiring the glucose. The replenishment is usually achieved by vigorous shaking, bubbling or special impellers. The growth media is surrounded by air which has an oxygen fraction of 20% equivalent to about 10 µmol per liter (of air). As analyzed in Figure 3, a headspace of a few times the culture volume contains enough oxygen for the culture growth, as long the aeration is vigorous enough to dissolve the oxygen from the headspace into the liquid media. As an alternative way to think about this estimate, consider the rule of thumb that the conversion of glucose to bacterial biomass requires about 1 g of O2 per 1 g of cell dry weight produced (most of it emitted upon respiration as CO2).  An OD600 of 1 has about 1 g cell dry weight per liter which will require 1 g of oxygen, or 30 mmol, in accordance with the above derivation. 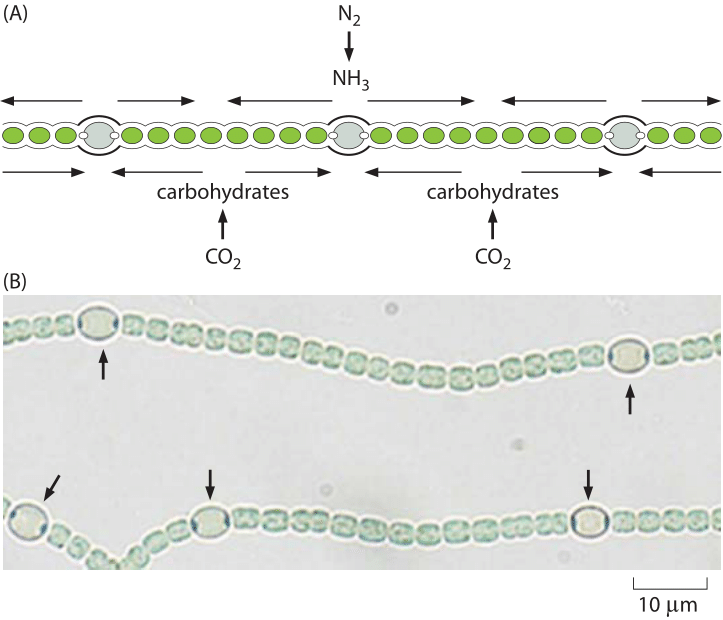 Oxygen is not the only critical cellular component that is in limited supply. Nitrogen, which comprises about 80% of the Earth’s atmosphere, is highly inert as it is almost exclusively tied up in the form of N2.   This nitrogen arrived in the atmosphere through the action of bacteria that utilize nitrogen as an electron acceptor in a process known as denitrification (another example of how biology helps shape the earth). To make the atmospheric nitrogen available again for biochemistry there is a need for a challenging process, i.e. turning nitrogen into ammonium (NH4+), nitrates (NO3–) or nitrites (NO2–). The organisms able to perform this nitrogen fixation process are single-celled organisms such as the microbial symbiotic partners found at the roots of legumes. Only one enzyme is able to carry out this process, namely, nitrogenase. Nitrogenase is oxygen sensitive thus requiring a local environment that is devoid of oxygen, a fact that leads some microbial systems to develop specialized cells known as heterocysts, as shown in Figure 4, that are the site of these nitrogen transactions. On a global scale, the natural cycle of nitrogen fixation is increased by humanity through a comparable amount of reduced nitrogen achieved in the industrial Haber-Bosch process resulting in fertilizers that are essential for feeding a large part of humanity but that also result in the ecological eutrophication mentioned above. The fact that humans are making changes to major biogeochemical cycles involving the pools of these key inorganic substances alerts us to think about what is effectively a giant, human-run experiment engaged in altering the biosphere.

What is the density of cells?
What quantities of nutrients need to be supplied in growth media?