How big are the cell’s filaments?

Figure 1: The cytoskeleton. (A) Fluorescence microscopy image of an epithelial cell (PtK1) during furrow onset. The cell was fixed roughly five minutes after onset of anaphase with filamentous actin labeled in red, microtubules labeled in green and DNA labeled in blue. (B) Structural models of actin and microtubules. (Image courtesy of Julie C. Canman and E. D. (Ted) Salmon at the University of North Carolina)

Cell biology is a subject of great visual beauty.  Indeed, magazines such as National Geographic and microscopes manufacturers exploit this beauty with contests to see who can come up with the most stunning microscopy images of cellular structures. An example of such an image is shown in Figure 1A. One of the mainstays of these images are colorful depictions of the many cytoskeletal filaments (actin and microtubules, shown in Figure 1B) that crisscross these cells. These filaments serve in roles ranging from helping cells move around to providing a molecular superhighway for cell traffic to pulling chromosomes apart during the process of cell division.  How should we characterize this molecular network structurally?  How long is the typical filament and how many of them span the “typical” eukaryotic cell?

Table 1: Properties of the main cytoskeleton components: actin and microtubules.

To consider the “size” of the cytoskeleton, we take a hierarchical view starting at the level of the individual monomers that make up the filaments of the cytoskeleon, and then pass to the properties of individual filaments, followed finally by the structural properties and extent of the cytoskeletal networks found in cells. Cytoskeletal filaments are built up of individual monomeric units, which are building blocks of filaments as seen in Figure 1B and their properties summarized in Table 1. For example, each of the monomeric units making up an actin filament is roughly 5 nm in size with a molecular mass of about 40 kDa. Tubulin subunits that make up microtubules have comparable dimensions. To be more precise, tubulin dimers made up of alpha and beta tubulin subunits (each of mass roughly 50 kDa) form protofilaments with a periodicity of 8 nm. Like with many other proteins, the structural features of these proteins have been determined using x-ray crystallography and their sizes are quite typical for globular proteins.

Figure 2 : Sizes of actin mRNA, protein and filament. The mRNA molecule is shown next to the corresponding protein monomer that it codes for (based on human actin A). The monomers assemble into actin filaments such as shown at the bottom. For reference, this filament fragment is only 1% of the measured persistence length of these structures.

Figure 2 provides an opportunity to delve more deeply into these structures and to develop our intuition of the length scales of this protein by showing the mRNA, protein monomer and a fragment of an actin filament showing 1% of the persistence length at correct proportion. If we take individual monomeric units of actin and mix them in solution, over time, they will spontaneously polymerize into filamentous structures like those shown in Figure 1B.  For actin, these filaments are microns in length with a corresponding diameter of only 6 nm, meaning that they have an extremely large aspect ratio. Similarly, tubulin monomers come together to form hollow cylindrical filaments usually made up of 13 separate “protofilaments”.

A number of clever methods have been worked out for measuring the mechanical properties of individual filaments ranging from measuring the spontaneous thermal fluctuations of the filaments in solution to working out the force at which they buckle when subject to an applied load at their end. Classic early experiments exploited the ability to fluorescently label filaments which permitted the visual inspection of their dynamics under a microscope. The spectrum of vibrations is related, in turn, to the persistence length and such measurements yield a persistence length of roughly 10 μm for actin (BNID 106830) and a  whopping 1-10 mm for microtubules (BNID 105534).

In this case, the hollow cylindrical structure has a diameter of roughly 25 nm. To get a sense of these aspect ratios when applied to everyday objects we consider a microtubule with a typical length of 10 μm.  To compare this to a human hair, note that a human hair is roughly 50 μm in diameter, meaning that for such a hair with comparable aspect ratio, it will be 400 times longer, with a length of 2 cm. Because of their slender geometries, these filaments have fascinating mechanical properties which permit them to apply forces in key cellular processes as we will see in the vignette “How much force is applied by cytoskeletal filaments?”. A useful parameter that characterizes the elastic behavior of these filaments is the persistence length, which is a measure of the length scale over which a filament is “stiff” or “straight”, i.e. how far you have to proceed along a thermally fluctuating filament before the two ends have uncorrelated orientations.

A number of clever methods have been worked out for measuring the mechanical properties of individual filaments ranging from measuring the spontaneous thermal fluctuations of the filaments in solution to working out the force at which they buckle when subject to an applied load at their end. Classic early experiments exploited the ability to fluorescently label filaments which permitted the visual inspection of their dynamics under a microscope. The spectrum of vibrations is related, in turn, to the persistence length and such measurements yield a persistence length of roughly 10 μm for actin (BNID 106830) and a  whopping 1-10 mm for microtubules (BNID 105534).

Cytoskeletal filaments are generally not found in isolation. In most biological settings, it is the behavior of collections of filaments that is of interest. One of the most beautiful and mysterious examples is the orchestrated segregation of chromosomes during the process of cell division, the physical basis for which is mediated by a collection of microtubules known as the mitotic spindle (see Figure 3A). This figure shows a key stage in the cell cycle known as metaphase. The chromosomes of the daughter cells that are about to be formed are aligned in a structure that is surrounded by oriented microtubules, which pull those chromosomes apart during the subsequent stage of anaphase. What is the distribution of microtubule lengths within such spindles?  The answer to this question is a mechanistic prerequisite to understanding both the nature of the spatial organization of the mitotic spindle, but also how force is generated during the process of chromosome segregation. 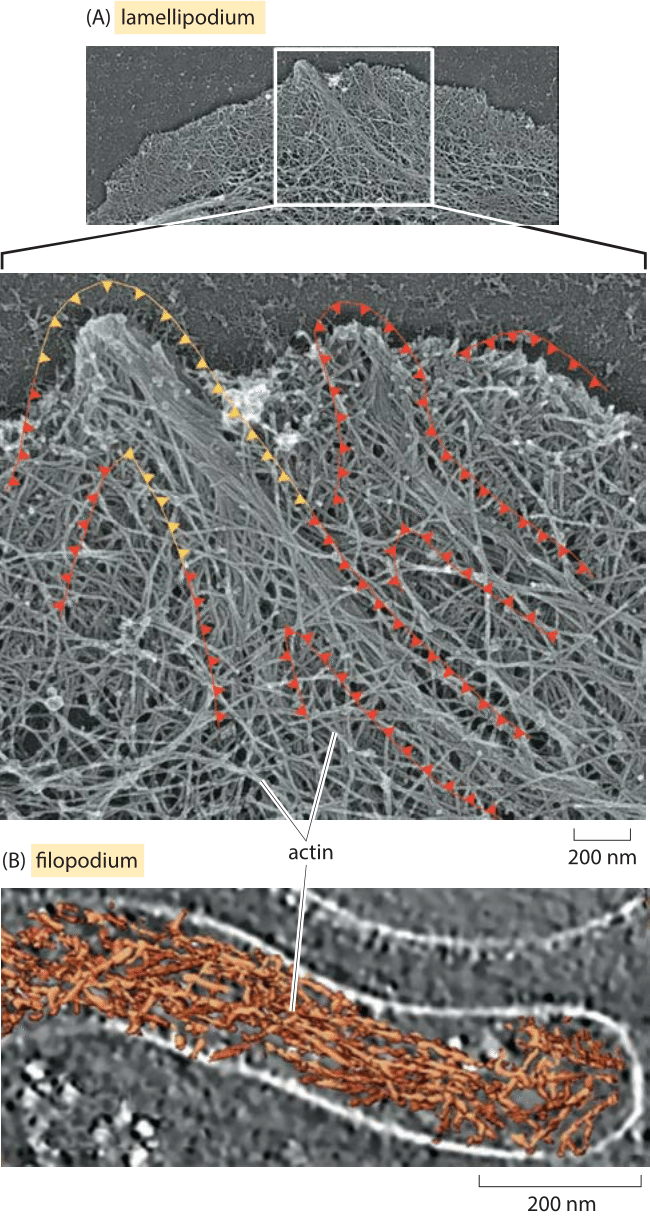 Several approaches have shed light on such questions. Imaging with electron microscopy, it is possible to resolve individual microtubules within the spindle and to measure their lengths. An example of the kind of images used to perform such measurements as well as the resulting distributions is shown in Figure 3B for the relatively small spindles of yeast cells. These spindles have a size of roughly 2 μm and involve on the order of 50 different filaments connected in parallel, each one composed of several microtubules connected together by molecular motors (BNID 111478, 111479). However, such studies become much more difficult for characterizing the entire distribution of microtubules in the spindle of animal cells, for example. In this case, approaches using fluorescence microscopy and exploiting microtutubule depolymerization dynamics makes it possible to characterize the length distribution for much larger spindles such as those in the egg of the frog Xenopus laevis as shown in Figure 4.

Just as microtubules serve in many different roles, actin too is one of the central players in a diverse array of processes in biology. One example that will serve as a useful entry into the collective properties of filaments is that of cell motility. Motion of crawling cells such as keratocytes are driven by two distinct actin-related processes, one through the relatively thin protrusions known as filopodia, and the other through the much broader lamellipodium protrusions. The speed of keratocyte migration is about a quarter of a micron per second. Given that the addition of an actin monomer increase the length of the filament by about 3 nm we infer a net incorporation rate of roughly 100 monomers per second in each actin filament. The act of crawling can be broken down to its microscopic components by appealing to electron microscopy images like those shown in Figure 5.  Figure 5A shows the leading edge of a fibroblast that has had its membrane peeled away and the actin filaments decorated with metals rendering the filaments of the lamellipodium visible.  In the second example, these same kinds of filaments are viewed without metal staining by using cryo electron microscopy to reveal the filopodium in a Dictyostelium cell.

As a look at older cell biology textbooks reveals, it was once thought that cytoskeletal filaments were the exclusive domain of eukaryotes. However, a series of compelling discoveries over the last several decades rewrote the textbooks by showing that bacteria have cytoskeletal analogs of actin, microtubules and intermediate filaments. Like their eukaryotic counterparts, these filaments are engaged in a sweeping array of cellular activities including the segregation of plasmids, the determination and maintenance of cellular shape and the cell division process. Of course, the drama plays out on a much smaller stage and hence the cytoskeletal filaments of bacteria have sizes that are constrained by the sizes of the cells themselves.

What is the thickness of the cell membrane?
Concentrations and Absolute Numbers – Introduction