What is the electric potential difference across membranes? 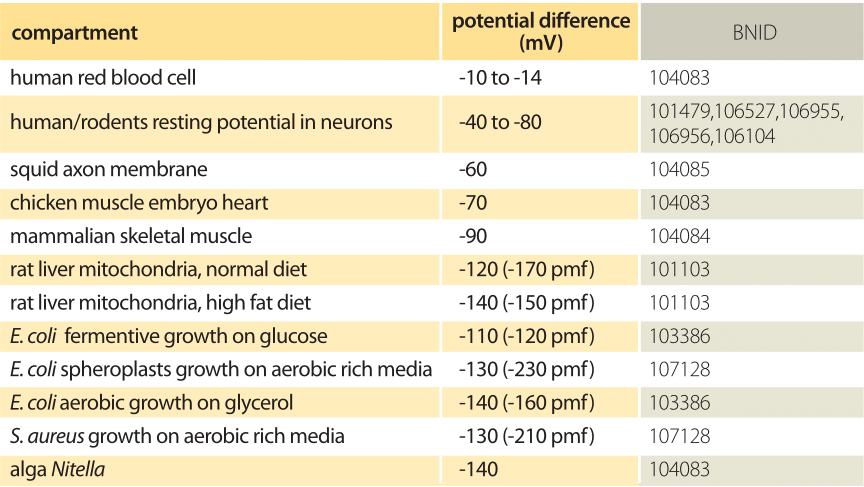 Table 1: Electric potential difference over a range of biological membranes. Negative values indicate that the outer compartment is more positive than the inner compartment. pmf is the total proton motive force that includes the effect of pH. When the pH of the media changes the electric potential of single celled organisms tends to change such that the pmf remains in the range -100 to -200 mV.

Many of the most important energy transformations in cells effectively use the membrane as a capacitor resulting in the storage of energy as a transmembrane potential. Energy-harvesting reactions, such as those involved in photosynthesis, pump protons across the membrane. On their return back across the membrane, these protons are then harnessed to synthesize ATP and to transport compounds against their concentrations gradients. For the mitochondria this potential difference has a value of roughly 160 mV (BNID 101102, 101103) and for E. coli it is about 120 mV (BNID 103386). A pH difference between two compartments that are membrane bound adds 60mV per pH unit difference to the overall driving force for proton transport. This sum of electric and concentration difference terms is the so-called proton-motive force, critical for the operation of most membrane anchored energy transformations, for example in chloroplasts. A series of representative examples for potential differences in a variety of cellular contexts are given in Table 1. To recast these numbers in perhaps more familiar units, recall that the energy scale associated with a potential V is given by qV, where q is the charge moved across that potential. If we take the characteristic 100 mV energy scale of membrane potentials and multiply by the electron charge of 1.6 x 10-19 coulombs, this yields an energy in Joules of 1.6 x 10-20 J.  If we recall that kBT ≈ 4 pN nm ≈ 4 x 10-21 J, then we see that the membrane potential energy scale can be remembered as 100 mV ≈ 4 kBT.

How many protons need to be pumped in order to build up these kinds of potential differences? Let’s be generous and assume the membrane voltage difference is made fully through proton transport even though other ionic species are known to make a large contribution. In Figure 1 we perform a back of the envelope calculation that treats the cell membrane as a parallel plate capacitor. The areal charge density σ  of a parallel plate capacitor is related to the voltage difference σ via the relation

where d is the membrane width (≈4nm) and  and are the relative and vacuum permittivity respectively. The total charge q is

where A is the surface area, which for the membrane of E. coli is ≈5 mm2, and e is the electron charge. The relative permittivity (dielectric constant) of the bilayer is roughly ≈2 (BNID 104080) and plugging in the numbers this leads to about 104 protons overall as shown schematically in Figure 1 and is consistent with the membrane having a specific capacitance of 1 mF/cm2 (BNID 110759). In the vignette on “What is the power consumption of a cell?” we noted that the rate of ATP usage by E. coli is ≈1010 ATP during a cell cycle that can be as short as 1000 s, i.e. an expenditure rate of 107 ATP/s. With ≈4 protons required to make one ATP, the membrane charge if not replenished continually would suffice to produce less than 104 ATPs. This potential would be depleted in ≈1 ms under normal load conditions inside the cell. 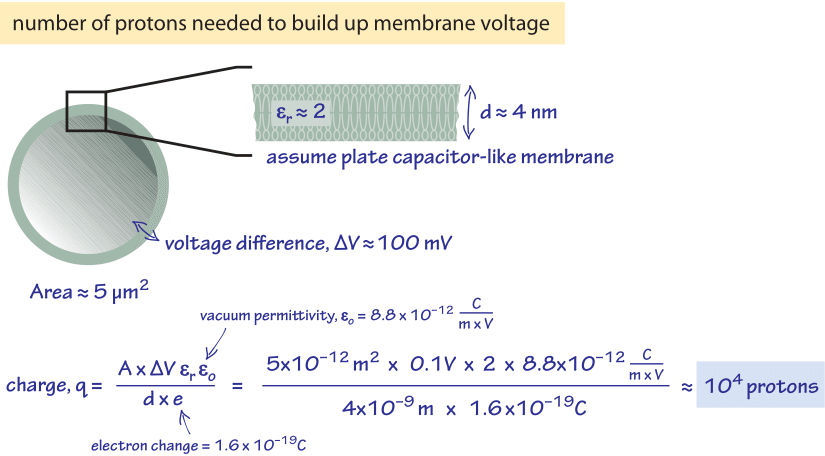 Figure 1: Back of the envelope schematic calcuation on how many protons would be required to build up the membrane voltage difference if it was made fully through transport of protons.

Another way of viewing these same numbers that yields a surprising insight is to note the ratio of the charges separated across the membrane to the overall charge of ions in the cell. In the opening chapter section on tricks of the trade we asserted the rule of thumb that in a volume the size of an E. coli cell a concentration of 1 nM is equivalent to one molecule per cell. Thus, an overall ion concentration of ≈100 mM in E. coli translates into ≈108 charges/cell.  On the other hand, in order to achieve the voltage difference across the membrane, the calculation in the previous paragraph shows that it requires 104 protons overall, i.e. only 1/10000 of the total ion charge in a bacterial cell. The fraction is even smaller in larger cells such as neuronal cells, with the charges associated with action potentials being a small fraction of the overall ion concentration in the cell. This shows the property of cells to be close to electro-neutral, i.e. even though a voltage difference exists, there is only a tiny relative difference in the total ion concentration.