What is the energy in transfer of a phosphate group?

ATP hydrolysis is one of the quintessential reactions of the cell and has led some to christen the ATP synthase, which adds phosphate groups onto ADP, as “the world’s second most important molecule” (DNA arguably being the first). But phosphate groups have much broader reach than in their role as one of the key energy currencies of the cell.   Though the central dogma paints a picture of the great polymer languages as being written to form “sentences” of nucleic acids and proteins as long chains of nucleotides and amino acids, respectively, in fact these languages also use accents. Specifically, the letters making up the alphabets used in these languages are accented by a host of different chemical modifications some of which involve the addition and removal of charged groups such as phosphates. Just like in the French language, for example,  an accent can completely change the sound and meaning of a word, these molecular accents do the same thing.

What are the functional consequences of these various modifications to nucleic acids and proteins and how can we understand them in terms of the overall free energy budget of these molecules? Phosphate groups, for example, are often one of the key carriers of cellular energy.  However, the case of ATP and the energetics associated with its hydrolysis are discussed in a separate vignette on “How much energy is released in ATP hydrolysis?”. In proteins phosphate groups serve as information carriers.  Specifically, a limited set of amino acids can be subject to phosphorylation as only they have the functional groups available that can serve as phosphate tagging sites (-OH in serine, threonine , tyrosine and rarely, aspartate and -NH in histidine).

A simple “coarse-grained” picture of the role of such charged groups is that they shift the energetic balance between different allowed states of the molecule of interest.  For example, a given protein might have several stable configurations, with one of those states having an overall lower free energy.  The addition of a charged group such as a phosphate can then tip the free energy balance such that now a different conformation has the lowest free energy. As an example we take the protein Ste5 in yeast which can be bound to the membrane or unbound. These two states have significant implications for signaling in the process of mating as well as many other decisions dictated by the MAPK pathway. The propensity to adopt either of these two forms of Ste5 is controlled through phosphorylation. The phosphorylated form of the protein was measured to have a decreased binding energy to the membrane of ≈6kJ/mol (≈2 kBT, BNID 105724) which is equivalent to an affinity ratio of ≈20 between the phosphorylated and unphosphorylated cases. Phosphorylation also decreases the binding affinity energy of the transcription factor Ets1 to DNA by ≈1.6 kJ/mol (≈0.7 kBT) or about a factor of 2 in the affinity binding constant (BNID 105725). 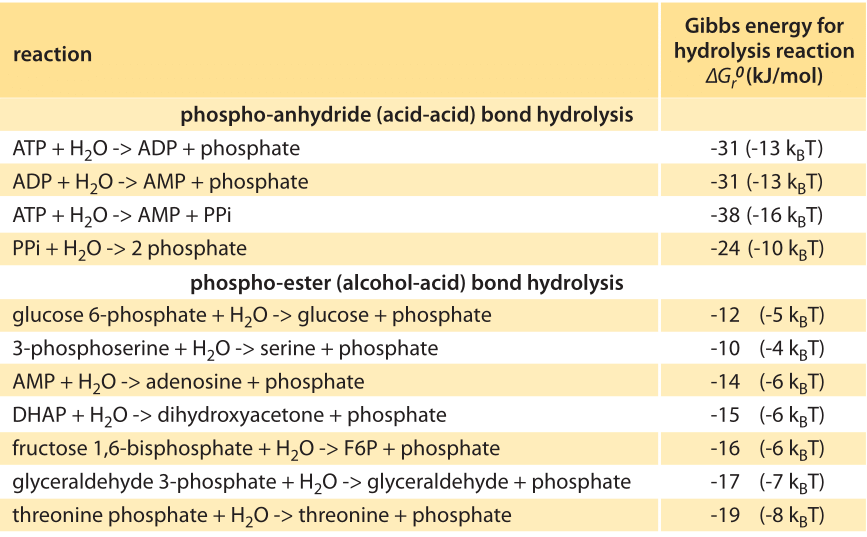 Table 1: Standard Gibbs energy released in the hydrolysis of different types of phosphate bonds. Values are from Equilibrator based on experimental measurements. Values are rounded to two significant digits.

In shifting from phosphate groups as tags on proteins to their role as energy carriers it is essential to understand that the amount of energy released when a phosphate group bond dissociates depends on the compound it is attached to. Common metabolites exhibit a big difference in the energy released upon hydrolysis of their phosphate group. For example ≈60kJ/mol (≈24 kBT) for hydrolysis of PEP (phosphoenolpyruvate), but only ≈13 kJ/mol (≈5 kBT) for glucose-6-phosphate (BNID 105564). In Table 1 we collect information on the energetics of reactions involving phosphate bonds. Data on thermodynamic properties such as the change in Gibbs energy in biochemical reactions can be found using the eQuilibrator database (http://equilibrator.weizmann.ac.il/). Such differences are at the heart of the energetic transformations that take place in glycolysis and the TCA cycle, the cell’s energy and carbon highways. What accounts for these differences? Is there an easy rule of thumb that can be applied to predict the energetic content of such groups?

Figure 1: The energetics of two types of phosphate bonds. The phospho-anhydride bond is less stable and much further removed from equilibrium and thus much more energetic when hydrolyzed by water. The acid-acid bond could be with another phosphate as in ATP or alternatively with a carboxyl (i.e. acetyl-phosphate), that it is even more energetic than the phosphate-phosphate bond.

These differences can be partially understood through the changes in bond type as illustrated in the different scenarios depicted in Figure 1. Phosphate groups bound to another phosphate group are one type (known as phosphoanhydride bonds), while those phosphate groups that bind to an alcohol are a different type (known as a phosphoester bond). A naïve way to rationalize this is that a carbon surrounded by hydrogens is more “electron rich” and the bond to the overall negative phosphate group is more stable and its hydrolysis less favorable. This contrasts with the case of a phosphate or carboxyl group where the double bond of the carbon to oxygen makes it “electron poor” and thus the bond to phosphate which is also “electron poor” is unstable and its hydrolysis more energetic. A more quantitative explanation is based on the pKa’s of the groups whereas the fully rigorous explanation requires quantum mechanical analysis.

For example, as the main ingredient of signal transduction, ATP hydrolysis to ADP and inorganic phosphate (breaking a bond between two phosphates) is used in order to phosphorylate amino acids in proteins. In the most common cases, those of phosphorylation on serine and threonine, the phosphate group reacts with a hydroxyl group (-OH). Other amino acids that can be phosphorylated are tyrosine, histidine and aspartate, the latter two serving in the important example of two-component signaling systems in prokaryotes. Such transfers are carried out by kinases and are energetically favorable. A phosphatase performs the reverse event of severing the phosphate bond in a protein. The action of the phosphatase is thermodynamically favorable (though might require activation) because the phosphate bond on the protein is still far from equilibrium. In biochemist lingo, the transfer of a phosphate group from an ATP (a phosphoanhydride) to an amino acid (a phosphoester), still retains close to half of the free energy of ATP hydrolysis.

In closing, we remind the reader that as mentioned in the vignette on “How much energy is released in ATP hydrolysis?”, the free energy potential is a function of the distance from equilibrium which depends on the concentrations. We stress the counterintuitive assertion that the energy in a bond depends on the concentrations of the molecules. At equilibrium, the concentrations are such that energies for all transformations are zero, even the so-called “energy rich” ATP hydrolysis reaction. In fact there is no energy to be had from an ATP molecule or a phosphate bond in general if they are not out of equilibrium from their surroundings.

How much energy is released in ATP hydrolysis?
What is the free energy released upon combustion of sugar?