What is the maturation time for fluorescent proteins?

Fluorescent proteins have become a dominant tool for the exploration of the dynamics and localization of the macromolecular contents of living cells. Given how pervasive the palette of different fluorescent proteins shown in Figure 1 with their many colors, and properties has become, it is incredible that we have really only seen a decade of concerted effort with these revolutionary tools. Indeed, it is difficult to imagine any part of biology that has not been touched in some way or another (and often deeply) by the use of fluorescent reporter proteins. 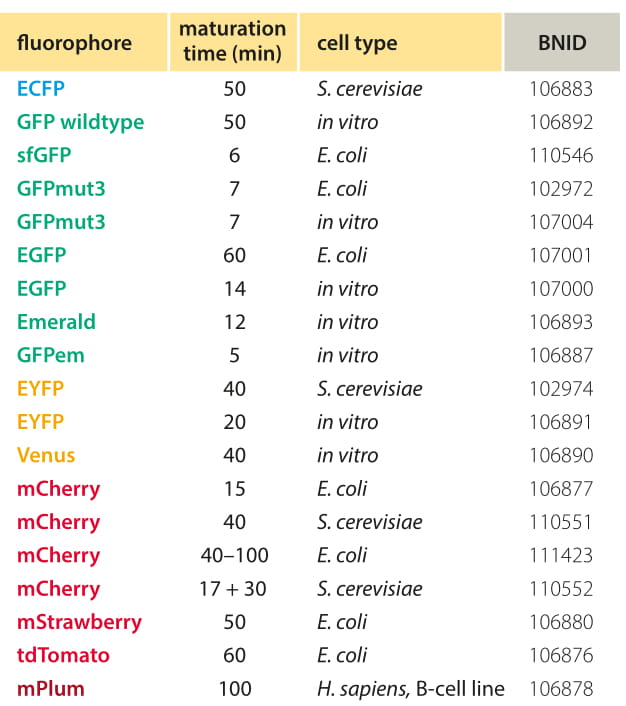 Table 1: Common fluorescent proteins maturation times. Because different approaches and conditions still give quite different values one should be very careful in studies where the maturation time can affect the conclusions. In mCherry there are indications of two time scales, the first leading to fluorescence at a different wavelength regime (Khmelinskii et al., 2012). Values are rounded to one significant digit. Comprehensive table can be found at Lizuka et al, 2011. For definitions of fluorophores via mutations relative to WT see Table S2 of Shaner et al, 2005.

However, as a tool for exploring the many facets of cellular dynamics, fluorescent proteins have both advantages and disadvantages. Once a fluorescent protein is expressed it has to go through several stages until it becomes functional as shown in Figure 2. These processes are together termed maturation. Until completion of the maturation process, the protein, even though already synthesized, is not fluorescent. To study dynamics, it is most useful if there is a separation of time scales between the reporter maturation process (which preferably should take place on “fast” time scales) and the dynamics of the process of real interest (that should be much slower than the maturation time). The first stage in the maturation process (not depicted) is the most intuitive and refers to the protein folding itself, which is relatively fast and should take less than a minute, assuming there is no aggregation. The next stage is a torsional rearrangement (Figure 2B, C) of what can be thought of as the active site of the fluorophore, the amino acids where the conjugated electrons that will fluoresce are located.  The next step, known as cyclization (where a ring is formed between two amino acids, Figure 2 C, D), is longer but still fast in comparison to the final and rate-limiting step of oxidation. In this final oxidation step, molecular oxygen grabs electrons from the fluorophore, creating the final system of conjugated bonds. All these steps are a prerequisite to making the active site fluoresce.

There are only a limited number of reliable measurements of the maturation time that we tried to summarize in Table 1, and the values are still far from being completely agreed upon. One approach to measure fluorophore maturation is by moving from anaerobic growth where the fluorophore protein is expressed but cannot perform the slowest step of oxidation to aerobic conditions and watching the rate of fluorescent signal formation. More commonly, inducible promoters or cycloheximide induced translation arrest are used. Nagai et al. (BNID 103780) measure a time scale of less than 5 minutes for the maturation of YFP and 7 minutes for the corresponding maturation of GFP in E. coli.  By way of contrast, Gordon et al. (BNID 102974) report a time scale of ≈40 minutes for the maturation of YFP and a very slow ≈50 minutes for the maturation of CFP though part of the difference can be explained by the fact that in this case the measurements were carried out in yeast at 25oC. The measurements were done by inducing expression and after 30 minutes inhibiting translation using cycloheximide. The dynamics of continued fluorophore accumulation even after no new proteins are synthesized was used to infer the maturation time scale. Note that for many of the processes that occur during a cell cycle such as expression of genes in response to environmental cues, the maturation time can be a substantial fraction of the time scale of the process of interest.  If a marathon runner stops for a drink in the middle of a race, this will hardly affect the overall time of the racer’s performance. On the other hand, if the runner stops to have a massage, this will materially affect the time scale at which the racer completes the race. By analogy with the runner stopping at a restaurant, the maturation time can seriously plague our ability to accurately monitor the dynamics of a variety of cellular processes.

Chromophore maturation effectively follows first-order kinetics in most studies performed. As a result, this implies that we will find a small fraction of functional flurophores much earlier than the maturation time. Still, to have the majority of the population active, the characteristic time scale we need to wait is roughly the maturation time itself. This effect results in a built-in delay in the reporting system and should be heeded when estimating response times based on fluorescent reporters. Similarly, if translation is being stopped (say by the use of a ribosome inhibitor such as cyclohexamide) one would still have a period of time where some proteins that were translated before the inhibition are coming “online” and add to the signal. This again should be taken into account when estimating degradation times.

Another dynamical feature of these proteins that can make them tricky for precisely characterizing cellular dynamics is the existence of photobleaching.  This process has a characteristic time scale of tens of seconds using standard levels of illumination and magnification. This value means that after a continuous exposure to illumination for several tens of seconds, the fluorescent intensity will have decayed to 1/e of its original value. Though sometimes a nuisance, recently this apparent disadvantage has been used as a trick both in the context of fluorescence recovery after photobleaching (FRAP) that allows inference about diffusion rates and in superresolution microscopy techniques where the bleaching of individual fluorophores makes it possible to localize  these proteins with nanometer scale resolution.

Differences in maturation times of different fluorophores were recently turned into a way to measure rates of degradation and translocation without the need for time course measurements (A. Khmelinskii et al., Nat. Biotech., 30:708, 2012). The protein of interest was fused not to one, but to two fluorescent tags, a fast maturing GFP, so called superfolder, and a slower maturing mCherry. The ratio of intensities was measured and this can serve as a built-in timer. If the protein of interest is short lived, the slowly maturing tag would often not have time enough to fluoresce before the protein is degraded, and its intensity ratio to the quickly maturing tag would be low. At the other extreme, if the protein is long lived, there is ample time for the more slowly maturing tag to fluoresce, and its ratio to the fast dividing tag would be high. The ratio of intensities thus serves as a timer which was used for example to show that daughter cells tend to get the old copies of some protein complexes such as spindle pole bodies and nuclear pore complexes, while the mothers retain the newly formed copies.

What is faster, transcription or translation?
How fast do proteasomes degrade proteins?