What quantities of nutrients need to be supplied in growth media?

Often explanations that are widely accepted turn out to be wrong.  An everyday scientific example concerns the most commonly used media for growing bacteria across the globe, namely, LB media. Inquisitive students are usually told that this acronym originates from the names of its developers, Luria and Bertani. This story seems to make sense and the explanation is widely “known”. Yet, Giuseppe Bertani himself states that it was actually Lysogeny Broth, which led to the coining of the famed acronym, in reference to the experiments in which this media was used to study the lysogenic phase of bacteriophage in E. coli. Standard lore being off the mark regarding even such well-known recent human inventions, suggests caution when considering seemingly beautiful explanations for the origins and purpose of ancient evolutionary inventions.

The LB medium contains mostly yeast extract and tryptone (as well as other trace constituents) that supply the building blocks needed for fast growth. Using substances such as yeast extract automatically implies significant differences in composition between batches, making it an ill-defined medium whose use is discouraged for physiological and quantitative studies. Originally LB contained glucose but when formalized as a common lab media it was defined without glucose and whenever glucose is added, commonly, 1-4 g/L (0.1-0.4%), that is indicated separately. For fast growth, LB is very useful, but when better concoctions were developed they adopted names like Super optimal broth (SOB) and when supplemented with glucose, Super optimal broth with catabolite repression (SOC).  The battle for impressive names to indicate potent media did not end there, but continued the hyperbole with names such as Super Broth (SB), Terrific Broth (TB) etc.

When repeatability and accuracy is of importance in characterizing bacterial physiology, defined media is used, most commonly M9 minimal media. How much biomass can be expected as yield from such media? Let’s start with the question of carbon supply in such media. In minimal media, the only carbon present comes from the sugar added, often 2 g/l for bacteria which is 0.2% by weight, recalling that the mass of the water used to make the medium is 1000 g/l (other organisms like yeast are usually grown at higher carbon source concentrations, typically 2%). For aerobic growth a characteristic yield factor from sugar to biomass is about one half, i.e. »0.5 g cell dry weight per 1 g of sugar (BNID 105318). The rest of the mass is often released as CO2 through respiration or decarboxylation reactions or alternatively emitted as acids such as acetate as part of overflow metabolism. Interestingly, the evolutionary motivation for overflow metabolism, which excretes much of the imported carbon atoms back to the media, is still under lively discussion and is the subject of intensive research. In light of these numbers, the 2 g/l of sugar present in the media can be converted into 1 g/l of cell dry weight. We are now in a convenient position to connect the amount of sugar we put in the media to the resulting optical density, number of cells and number of atoms per cell. Converting from cells to optical density at 600 nm (OD600) can be performed by using the rule of thumb that 1 OD600 unit corresponds to ≈0.5 g dry cell weight per liter (BNID 107924). We thus expect a final OD600 from 0.2% glucose of ≈2. One should take care not be confused by the fact that many measurements today are performed in plate readers on multi-well plates where the path length is usually about one half or one third of the 1 cm used in standard cuvettes and thus the expected OD reading will be smaller by that factor. If one is interested in the number of cells, a useful rule of thumb states that an OD600 of 1 corresponds to about 109 E. coli cells/ml (BNID 106028, 100985; for budding yeast the conversion factor between cell number and OD600 is roughly 107, BNID 100986, 106301). At about 1010 carbon atoms per cell of 1 µm3 volume (as derived in the introduction to this chapter), this rule of thumb implies 1019 carbon atoms per ml of our OD600 =1 medium, or 1022 carbon atoms per liter. This is rewardingly consistent with our starting point of 2 g/l of sugar which is 1/100 of a mole and thus at a carbon yield of about one half the numbers pass our quick sanity check. Several points are worth noting about the rule of thumb regarding the conversion of OD readings to number of cells. One is that the accuracy of this value is relatively low as under different growth conditions the cell size can vary about 5 fold and thus the number could be correspondingly higher or lower. This is in contrast to the rule of thumb regarding the conversion from OD to dry mass which is much more robust, and thus preferable whenever the number of cells is not a must. A more trivial point is that most spectrophotometers are not linear at the range of OD of 1 and thus it is more accurate to work around OD600 of 0.1, which is equivalent to about 108 cells/ml (again noting the several fold possible variation with growth conditions and strain).

Are we entitled to focus on carbon when estimating yield? For comparison, let’s look at the oxygen requirements needed to synthesize cells and how this relates to the available oxygen. The needs of respiration in the form of oxygen are consumed at a ratio of about 1 g O2 per 1 g cell dry weight (BNID 105317). This oxygen will come from the headspace in the vessel used as the amount of oxygen soluble in the media is negligible as shown in Figure 1 of the vignette on “What are environmental O2 and CO2 concentrations?”. Beyond ensuring that there is enough shaking to achieve aeration there must be enough headspace volume if the growth chamber is closed to oxygen replenishment. How much headspace volume? To achieve 1 g cell dry weight per liter asks for 1 g O2. One liter of air weighs about 1 g but is only one-fifth oxygen and thus about 5 liter of headspace air volume will be needed per one 1 liter of media or a ratio of 5-fold. This is in line with common practices in microbiology that call for a headspace about 5-10 fold larger than the media space used. Further analysis and calculations on the oxygen requirements and availability are given in the vignette on “What are environmental O2 and CO2 concentrations?”. 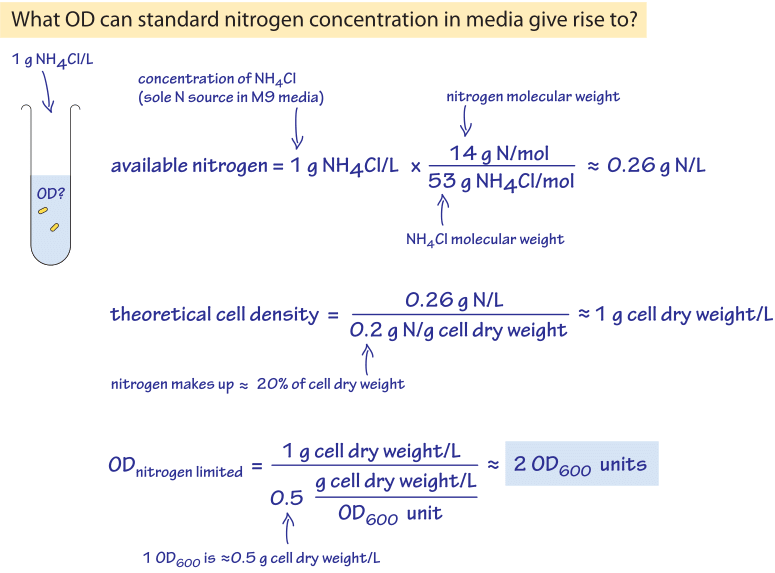 Figure 1: Back of the envelope calculation showing what optical density will result from complete utilization of a characteristic nitrogen content used in growth media.

We can similarly analyze nitrogen, phosphate and other macronutrients. Media are designed to make sure these are in excess and will not become growth limiting unless specifically intending to do so. In the back of the envelope calculation shown in Figure 1 we illustrate how this works out for the case of nitrogen, a cellular building block usually supplied in the form of ammonium. Growth media constructions are usually strict and pedantic about all major elements but in many cases trace elements like iron, copper etc. are not explicitly mentioned or added and somehow life in the lab seems to go on. Yet small amounts of these trace elements are essential as shown in Figure 2 (about 105 Fe, Zn and Ca atoms are required per E. coli cell and 104 Cu, Mn, Mo and Se atoms, BNID 108825, 108826).  This puzzle is resolved by the fact that trace elements are often contained as impurities in the distilled water used to make the media or even exist in the plastic and glassware used for growth. How much such contamination needs to exist? 105 iron atoms per bacterial cell volume corresponds to a concentration of about 100 µM and given that cells at saturation usually occupy about 1/1000 of the media volume, an initial concentration of 0.1 µM in the water will suffice. Indeed, tap water is allowed by standard to contain about one hundred times more iron than this requirement and often contains 1 µM. Yet, if the water used is purified enough one might find a lower yield that can be overcome by adding a concoction of trace elements.

Figure 2: Metal content of E. coli cells grown in LB and glucose minimal medium as determined by mass spectrometry. The E. coli metallome, i.e., the total metal content of the cell, is represented in terms of both concentrations and atoms per cell (grown in minimal medium) for each metal ion. The shown values are the mean of three independent measurements; error bars are small on this log scale and are not shown. (Adapted from C. E. Outten, Science, 292:2488, 2001)

The discussion above focused on bacteria and reflects the critical role played by prokaryotes in the development of modern molecular biology. However, interest in the medical applications of biology engendered parallel efforts aimed at figuring out the growth requirements of eukaryotic cells in culture. One of the pioneering efforts in this regard was spearheaded by Harry Eagle. Just as with the LB media described above, early efforts to grow mammalian cells in tissue culture involved undefined media derived from serum and embryo extracts, with HeLa cells, for example, originally grown in a combination of chicken plasma, bovine embryo extract and human placental cord serum. One of the outcomes of Eagle’s experiments was the elucidation of the requirements for essential amino acids that we are unable to synthesize ourselves. Eagle’s recipe, a common staple in labs to this day, ensures that amino acids and vitamins that bacteria synthesize themselves are added in ample amounts to support mammalian cells that have evolutionarily lost those biosynthetic capacities.

What are environmental O2 and CO2 concentrations?
What is the concentration of bacterial cells in a saturated culture?